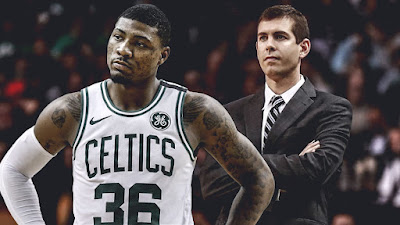 It has been an interesting start to the 2021-22 campaign for the Celtics or a somewhat disappointing one, which ever way you want to look at it.
At 3-5, new coach Ime Udoka has his work cut out for him, especially after Monday night's 128-114 loss to the Chicago Bulls that serves as an early punch to the jaw.
To make matters worse, Marcus Smart made some controversial comments about his All-Star teammates Jayson Tatum and Jaylen Brown that have been dissected over and over again the past few days.
According to ESPN's Adrain Wojnarowski, the Celtics reportedly had an "unproductive" and "emotional" players-only meeting in Orlando Tuesday night.
Brad Stevens, who has been around the core of this current roster for at least the last five years as a head coach, but despite now being the team's new president of basketball operations the message still remains the same when it comes to Smart and the rest of the Celtics' locker room -- keep disagreements in-house.

"I think any time you have things to say, you say it to the person or people. Whether they're right wrong or whatever, you say it directly to the person," he said Thursday on 98.5 The Sports Hub's Toucher & Rich program. "I think it's important…you have to be willing to have difficult conversations and put your name on it. The validity of the comments aren't as important as, we have to be able to sit face-to-face and say, 'OK, we all want to win. How do we find solutions because we were sitting at 2-5 on Monday?'"

When asked if Smart should have kept his remarks private, Stevens agreed and further elaborated on his reason.

"I think that's the way it should be," he said. "That's why Jaylen's comments were really good. I think the frustration of the night is real, and that's why comments happen.
"Was it ideal? No. Was it the right thing at the right time? Probably not. But at the end of the day, it's how you respond. You got to sit with those guys. You gotta go out face-to-face with those guys."

Following the Celtics' 92-79 win over the Orlando Magic, that snapped the team's three-game skid, Brown finally addressed the comments made by Smart in front of the media.

"In the midst of trying to win games, it's something that we probably didn't need," Brown said about Smart's remarks after the game, Wednesday night. "But, we all communicate and talk to each other. So, we're always trying to find ways to win and I'm open to any and everything when guys bring it to me, coaching staff. I'm always watching film trying to better myself and be a better basketball player and find ways to make my teammates better. So, it felt good to get a win today."

While it may seem like there's tension between the two teammates, Stevens did compare Brown and Smart's relationship as family members or siblings that may disagree with one another from time to time because they've been through so much together.

"Those guys have experienced a lot of highs together. They've experienced some tough losses together," he said. "You have moments. The key is, do you move on from that moment? Do you say what you need to say to each other and then make progress? We'll see what kind of progress we make.
"No team is perfect, but we have to show that we're going to grow and progress from here."

Stevens voiced his support of Smart as the Celtics' starting point guard. as someone who not only defends at a high level and his ability to lead the offense while having that potential of "making a shot with everything on the line."
On the subject of any possible changes to the roster due to the team's poor start, Stevens reacted by saying, "It's concerning, but I don't want to overreact to it either."
Joel Pavón
Follow @Joe1_CSP