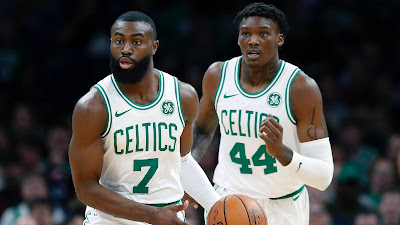 After missing the last eight games with a right hamstring strain, Jaylen Brown has been made available Monday night when the Celtics host the Houston Rockets.
The All-Star wing was close to retuning sooner, but was held out mostly due to precautionary reasons and just making sure he was as close to 100% ready to play.


The Celtics went 5-3 in Brown's absence and according to coach Ime Udoka, he'll play on a restriction and be limited to roughly 24 minutes tonight.
Robert Williams has also been upgraded to available after being sidelined over the last three outings with left knee tendinopathy. Per the Celtics' big man, he says "the knee is feeling good" and will not be put on any type of minutes restrictions upon his return.
Dennis Schröder, who has been playing on a sore ankle, was previously listed as probable but will play and come off the bench with Brown starting.
Romeo Langford has been cleared to play tonight after not returning to the second half of the Celtics 111-105 win over the Oklahoma City Thunder, due to a sprained ankle.
The only Celtic that's been ruled out against Houston is Josh Richardson, who was downgraded from questionable with a non-COVID illness.
Tip-off between the Celtics and Rockets is set for 7:30 PM ET at TD Garden.
Joel Pavón
Follow @Joe1_CSP