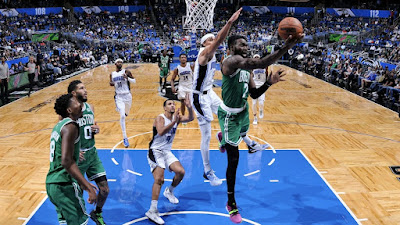 The Celtics put forward their best defensive effort of the young season with a 92-79 win against the Orlando Magic at the Amway Center Wednesday night.
Following an ugly 128-114 loss to the Chicago Bulls on Monday, Marcus Smart went on record to talk about how a lack of ball movement between his All-Star teammates was one of the team's Achilles heal on offense. Those controversial postgame comments prompted a reported "players-only" meeting on Tuesday when the Celtics arrived in Orlando.
While coach Ime Udoka called the gathering a team dinner rather than a meeting, his players responded with an 18-1 run to start the second half and put the Magic away to snap a three-game skid.

"We talked about their 18-point second quarter and we wanted to have some carryover," Udoka said to the media about the win. "We wanted to lock up the paint and make them beat us with jump shots."

Jaylen Brown led all scorers with 28 points on 10-of-17 shooting, while Jayson Tatum continued his early struggles, scoring 14 points to help beat Orlando (2-7) for Boston's seventh consecutive time in the past three seasons.
Al Horford, who finished with his fifth double-double of the season in six games and was only three assists shy of a triple-double, spoke about the importance of teammates getting things out in the open.

"A gathering, a team dinner -- it was just nice to break bread together and hang out," Horford said of the Tuesday session in which players were left by themselves for approximately 30 minutes to talk out their differences. "Most importantly, we talked about making sure we came out and had a good outing. Defensively, I felt like we took some steps."

The veteran big recorded 12 points, 12 rebounds, seven assists, three blocks and a steal in 26 minutes of action, as Horford continues to prove he's a vital piece to this Celtics roster.
Wendall Carter Jr. led the Magic with 13 points and 13 rebounds, while Cole Anthony also added 13 points. Orlando remains winless at home after scoring just 33 points in the final 24 minutes.
Both teams looked sluggish offensively in the second quarter, as each scored 18 points respectively and Boston trailed 46-44 at the break after shooting 36.4% from the field and 30% from deep in the first half.
The Celtics hit 11 of their first 17 shots to start the third period, while Orlando missed 14 of their first 15 attempts, giving Boston a 69-50 advantage.
While it was the second straight game that the Celtics had a 19-point lead in the third quarter, this time around Boston didn't let up like they did against the Bulls -- limiting the Magic to only 32.1% shooting and 20.9% from 3 on the night.
Before tip-off Udoka answered questions about Smart's remarks when it came to Tatum and Brown. The Celtics first year coach believes the inability to close out games is more to blame than any player being selfish.

"Losing two double-overtime games where Jayson had a game-winning shot against New York and Jaylen had a shot to win it against Washington, and then the last game where we were up 19, the record is one thing, but it's a big-picture approach," Udoka said in his pregame presser. "It could easily be 4-3, 5-2, and there probably wouldn't be questions about (the record). But the fact we haven't finished, you're going to get these questions, and 2-5 is not up to the standard or where we'd like to be."

The Celtics at 3-5 will have the tall task of trying to stop the red hot Heat (6-1) in Miami Thursday when they play the second night of a back-to-back, before heading to Dallas on Saturday to wrap up their mini road-trip.

Game Notes:
Boston outrebounded the Magic 50-46, while the Celtics handed out 24 assists on 33 made baskets and Orlando only had 15 assists on 27 made shots.
Joel Pavón
Follow @Joe1_CSP