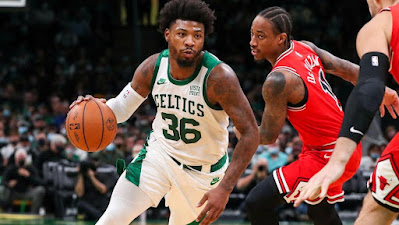 You can count Kendrick Perkins as one of many that didn't agree with what Marcus Smart said about Jayson Tatum and Jaylen Brown following the Celtics' ugly 128-114 loss to the Chicago Bulls.
The former C's big man and 2008 NBA champion took Smart's comments as criticism towards Tatum and Brown, as Perkins -- currently an ESPN analyst -- went as far to say "Marcus Smart has lost his damn mind."
On Tuesday morning, Perkins ripped Smart on ESPN's First Take, roughly 12 hours after the Celtics blew a 19-point lead to get outscored in the fourth quarter 39-11 and fall to 2-5 on the season.
Smart was asked how the Celtics' offense can turn things around as the starting point guard and he spoke about how there needs to be more ball movement, especially from the team's two All-Stars.

"Every team knows we are trying to go to Jayson and Jaylen, and every team is programmed and studied to stop Jayson and Jaylen," Smart said in his postgame comments Monday night. "I think everybody's scouting report is to make those guys try to pass the ball. They don't want to pass the ball and that's something that they're going to learn. They're still learning and we're proud of the progress they are making, but they are going to have to make another step and find ways to not only create for themselves but create for others on this team, to open up the court for them later in the game where they don't always have to take those tough shots or take tough matchups when they do get the 1-on-1 and see a trap. Just reading that.

While Tatum and Brown didn't speak to the media at all following what Smart had to say, Perkins went on to explain why he believes the current longest tenure Celtic's remarks were out of line.

"There are certain things you know as a player that you can't come out and do in an interview or come out and say in an interview, and those are one of the things," Perkins said Tuesday on First Take. "You cannot attack your two franchise guys in the media saying that they need to pass the ball. Not only are you attacking them, you're attacking the first-year head coach in Ime Udoka, who is just starting to get his feet into the sand a little bit and trying to figure things out."

The Celtics are riding a three-game skid and are 0-3 at home to start the season for the first time in their 75-year history. Meanwhile, Tatum has struggled on both ends of the floor, as he's just hitting 39.5% of his field goal attempts and 27% from behind the arc in his first seven outings.
With the Celtics clearly weathering a storm early in the season, Perkins says things are bad enough without Smart's criticism to make it worse than it already is.

"You don't need outside distractions. You don't need turmoil inside the locker room," Perkins added. "There's a reason why they didn't let Jayson Tatum and [Jaylen] Brown speak after the game last night because they would've had to go after Marcus Smart. How does Marcus Smart go up there talking about Jaylen Brown and Jayson Tatum need to pass the ball -- he should be talking about defense. You know what, [Chicago's] DeMar DeRozan had 37 last night on 75 percent shooting."

It's no secret that Perkins hasn't always been a fan of Smart, even last season the former Celtic called for the veteran guard to be traded and that his time with the team had ran its course, saying he thought "guys were tired of hearing his voice in the locker room." New president of basketball operations Brad Stevens decided to move Kemba Walker instead and give Smart a four-year, $77.1 million extension.
The Celtics will look to get back on track when they face the Orlando Magic and the red hot Miami Heat on back-to-back nights, starting Wednesday.
Joel Pavón
Follow @Joe1_CSP