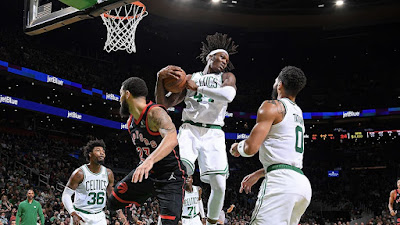 The Celtics have looked like the league's best defensive team over their last four games, with the latest effort resulting in a 104-88 win over the Toronto Raptors Wednesday night.
Boston has held their last four opponents to an average of 88 points per contest and are 3-1 in that span, with the Dallas Mavericks being the only bump in the road -- due to a Luka Doncic buzzer-beating 3. The Celtics as of late are playing like the defensive juggernaut that most believe they were capable of when the roster was put together.

"I think we've gelled to some extent. Obviously, that Florida trip was amazing. Holding teams to 78 and 79, but even 88 tonight against a well-oiled offensive team is a good job," said Ime Udoka in his postgame comments following the Celtics' blowout victory over Toronto. "We're learning the effort and intensity to win every single night, and defensively it's early in the season.

"It's a continuation of training camp with guys being in and out, I think, but we're starting to learn what we have to do to win on that end. So, we're mixing up some coverages, we've found out what some guys do better than what we did in preseason, and I think as coaches, we've learned as well. The players were hurt by what we did in the first game against these guys and really took it to heart and brought the effort tonight."

It was a week ago that the Celtics were winless at TD Garden and had a 2-5 record to start the season after an ugly 128-114 home loss to the Chicago Bulls -- where they blew a 19-point lead. Since then the defense has turned it up a notch, especially in the half-court set, as they getting into their defensive schemes earlier which limits them from constantly playing from behind like in their first seven games.

"Our demeanor, we got tired of getting our ass kicked, and it showed," said Marcus Smart during his postgame presser. "We continue to go out there and play 48 minutes through, and that's the difference. They came in last time and ran us off the floor, and we made sure that didn't happen again tonight."

While the Celtics still need to improve their defense in transition when they turn the ball over or on missed shots, another reason for their recent 180 has been the play of Robert Williams on both ends of the floor.

Williams grabbed eight offensive boards against the Raptors and put a lot of pressure on the rim in the pick-and-roll, while causing havoc in the paint all night. The Celtics big man was very active down low either gobbling up rebounds or throwing down lobs.

"He's finally stepping into his own," said Smart of Williams. "And we're excited for him. He's excited to continue to progress and keep going and only help himself and better this team. So we love everything Rob's doing."

Smart also had a great game worth mentioning, despite what has been said of the veteran over the past week or so stemming from his controversial comments. The Celtics point guard put up 13 points, six assists, three steals and committed zero turnovers. It's just another example of how one player can turn defense into offense more often than not.

"Just intensity and communication. I think Rob's been doing a great job of quarterbacking the defense, calling switches, calling coverages. I think Marcus did a good job today, and I think when he came in during the third, I think he swayed the momentum of the game, and I told him that after," said Josh Richardson on the two anchors on defense as of late. "Different guys have been stepping up, but I think across the board, it's just been communication and getting on the same page."

The Celtics over the last week and a half are quickly becoming the defensive-minded team that Udoka envisioned in the offseason. With the game-plan finally being executed, it has Boston climbing from the near bottom of the league in points allowed (110.6) into the top-two (99.7) over the last six games.
With a 5-6 record, next up for Boston, in what will be another real test of their newly found defensive identity, is a visit from the defending NBA champion Milwaukee Bucks Friday at the Garden on the first night of a back-to-back.
Joel Pavón
Follow @Joe1_CSP