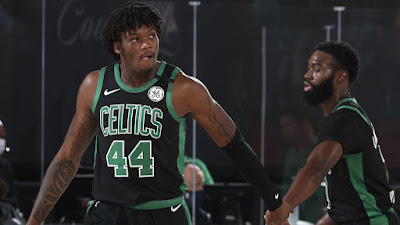 The Celtics are looking to be healthy for the first time since their blowout win over the Miami Heat two weeks ago, as they host the rival Los Angeles Lakers Friday at TD Garden.
On Thursday, the team listed both Jaylen Brown and Robert Williams as questionable for the first matchup of a four-game homestand. Brown has missed the last six outings with a right hamstring strain, while Williams sat out the second half of Boston's 98-92 victory over the Cleveland Cavaliers Monday and was ruled out of the C's 110-99 loss to the Atlanta Hawks Wednesday with left knee tendinopathy.

#NEBHInjuryReport for tomorrow vs. LA Lakers:

The Celtics have been cautious with Brown's return, after the original given timetable of 1-2 weeks following the reaggregation of a previous hamstring injury. The All-Star wing lead's the team in scoring at 25.6 points on 49.3% shooting from the field and 39.7% from deep, while Boston is 3-3 in his absence.
Ime Udoka called Williams' knee a "short-term" injury despite the Celtics big man trying to hide the pain in the first half against the Cavs. 'TimeLord' is having a breakout season, with career-best averages of 10.0 points, 9.2 rebounds and shooting a league-leading 73.4% from the field.
Meanwhile, the Lakers could have LeBron James back in their lineup after missing the last eight games with an abdominal strain, as he's listed as questionable and Anthony Davis is probable with a right thigh contusion.
The Celtics and Lakers are scheduled to tip-off tonight at 7:30 PM ET on ESPN.
Joel Pavón
Follow @Joe1_CSP