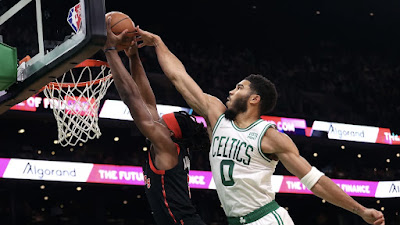 The Celtics avenged a blowout loss in their home opener to the Toronto Raptors by beating them 104-88 Wednesday night, for the first victory of the season at TD Garden.
Jayson Tatum led all scorers with 22 points, to go along with 12 rebounds and seven assists, as he nearly recorded a triple-double, despite shooting just 8-of-24 from the field and 3-of-7 from deep.

"He didn't have the best shooting night, but he knows how they're going to guard him and he knows the intensity he draws every night," Uboka said of Tatum's performance. "Our big point of emphasis with them over shifting and guarding on him, as you saw in the first half, he was really getting into the paint and kicking out for shots."

Robert Williams notched his second double-double of the year, recording 16 points and 13 rebounds -- eight of which were offensive boards for a career-best. Dennis Schröder, filled in once again for the injured Jaylen Brown (hamstring strain) as a starter, finishing with 20 points on 8-of-15 shooting.

"It was all about aggressiveness," Williams said during his postgame presser. "To be honest, I felt like us as a team did a great job of rebounding, not just me."

Six players scored in double-figures for the Celtics, including Josh Richardson with 15 points off the bench, while Marcus Smart added 13 points, six assists and Al Horford chipped in 10 to help improve the C's to a 5-6 record.
Rookie Scottie Barnes led Toronto with 21 points, Fred VanVleet had 16, while OG Anunoby and Gary Trent Jr. each netted 14. The Raptors dropped to 6-6 on the year.
Boston never trailed in this one, making it the first time they've led wire-to-wire in 11 games played this season.
The Celtics took a 16-point advantage into halftime and were up 12 heading into the final frame, before using an 8-0 run to take a 95-79 lead to put Toronto away with 5:35 left.
Last month the Raptors handed Boston a 32-point beating in front of their home crowd, as it rained boos at the end of the first half, to which coach Ime Udoka -- following the embarrassing loss -- said his team "got punked."
This time around it was the Celtics who held the Raptors to a scoring output in the 80's, as they also grabbed 12 offensive boards, plus forced 10 steals as part of 18 total turnovers -- converting them into 26 points on the night.

"We're learning the intensity and effort it takes to win every night," Uboka said during his postgame comments.

In their last four games, Boston has held their opponents to an average of 88 points per contest and are 3-1 since the infamous "players-only" gathering.
The Celtics will host the Milwaukee Bucks Friday before heading to Cleveland on a second night of a back-to-back.