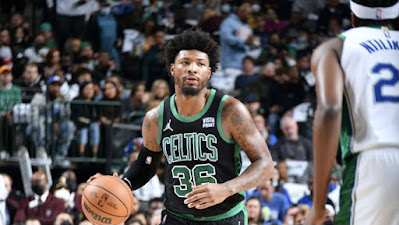 Marcus Smart was fouled on a late fourth quarter drive against the Mavericks Saturday night, according to the NBA, that essentially set up a costly mistake for the Celtics guard in the closing seconds of the 107-104 loss.
Per the league's L2M Report, the pivotal no-call took place when the game was tied 104-104 with 30 seconds left to play and the Celtics had an opportunity to get a 2-for-1. Smart drove the lane towards Kristaps Porzingis and he felt contact on his hip, as he hoisted up a floater at the rim.
The shot missed, while none of the officials blew their whistles and Luka Doncic grabbed the rebound for the Mavs with 28.1 seconds left, before calling a timeout leaving 16.6 seconds on the game clock.

Ton of talk about Marcus Smart’s foul. I’m blown away by this critical possession, getting Porzingis out on the wing and trying to shoot through/draw a foul instead of exploding to the rim…? pic.twitter.com/iqLkzBvczr

While the Celtics were guaranteed one last chance to get the ball back regardless of what were to occur on that Mavericks possession, Smart committed a foul on Doncic with 11.7 seconds left that Boston had to give, which shut off the shot clock -- giving Dallas plenty of time to put up a final shot.
Doncic made it over halfcourt to the left wing and let it fly to hit the game-winning 3 at the buzzer for the second time in his career against the Celtics.
Ime Udoka was asked if the strategy to foul Doncic was apart of the game-plan in the final seconds.

"There was no strategy," Udoka said to the media via Zoom. "It was not supposed to be a foul. A few of the guys asked me coming out of timeout and I let them know, and just a mistake there.
"But that's on me. I've got [to] let everybody know and make sure they know. Obviously, a five-, six-second differential, we want that last shot so I have to communicate that to everybody so everybody knows."

The play of the night might not have occurred at all if Smart had gotten the foul call on Porzingis. However, with the new rule that lets the action unfold instead of players foul hunting, especially late in games, has still not been the easiest thing to differentiate so far this season.
Joel Pavón
Follow @Joe1_CSP