Robert Williams out against Hawks with "short-term" knee injury 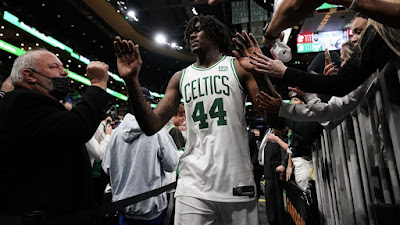 Celtics head coach Ime Udoka gave an update on Robert Williams ahead of their matchup tonight against the Atlanta Hawks.
The fourth year big man has officially been ruled out Wednesday, as the team remains cautious after Williams was downgraded from questionable with left knee tendinopathy.

#NEBHInjuryReport update: Rob Williams is out tonight, according to Coach Udoka, who adds, “It’s a short-term thing.”

Jaylen Brown will also not play, though he has been ramping up his workouts.https://t.co/I1EpHo8wD6


According to Udoka, the injury is considered a "short-term thing" after Williams missed the second half of the Celtics' 98-92 win over the Cleveland Cavaliers due to reportedly feeling "sharp pain" in his knee.
Grant Williams will have the tall task of starting against Clint Capella tonight, as the Celtics are hopeful for 'Time-Lord' to make his return on Friday when the rival Los Angeles Lakers come to TD Garden.
Robert Williams, who says he was trying to hide his knee pain and feels like he's "day-to-day," is having a career-year so far across the board -- averaging 10.0 points, 9.2 rebounds, 1.4 assists, 1.8 blocks, and 1.0 steal in 30.8 minutes, while shooting a league-leading 73.4% from the field.
Udoka also gave an update on Jaylen Brown, who is also still out with a hamstring strain, the All-Star wing has missed the last five games -- but could also make his way back into the lineup against the Lakers since he's has "ramped up his workouts," but for now still remains unavailable.
The Celtics (7-7) look to get above .500 for the first time this season when they take on the Hawks in Atlanta, beginning at 7:30 PM ET.
Joel Pavón
Follow @Joe1_CSP