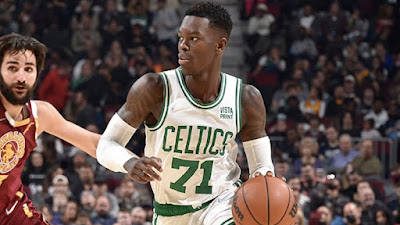 The Celtics were coming off an overtime win on a first night of a back-to-back, to blow a 19-point lead and fall to the Cleveland Cavaliers 91-89 at Rocket Mortgage Fieldhouse Saturday.
Dennis Schröder, who once again led the Celtics in scoring with 28 points on 10-of-19 shooting, had an opportunity to force OT -- but missed a jumper from the right baseline as the clock expired.

"We've got to play for 48 minutes," Schroder said during his postgame presser. "It's the NBA, everybody makes runs. It's about how your respond. They did a great job, give them props."

Jayson Tatum scored 21 points, but was 8-of-22 from the field and 1-of-8 from deep to go along with six costly turnovers.

"Jayson showed frustration on his shots, but you've got to play through that," Celtics coach Ime Udoka said. "He had some turnovers late -- some sloppy ones -- but he has to find a way to affect the game in a positive way when his shot isn't falling."

Robert Williams recorded his third straight double-double and his fourth in the last five outings with 12 points, 16 rebounds and three blocks. Marcus Smart missed all five of his shot attempts, but finished with eight assists and five steals for the Celtics -- who got their two-game win streak snapped and are now 6-7 on the season.
Besides Jaylen Brown (hamstring) being out, the Celtics were also without Al Horford (back) and Josh Richardson (knee).
Darius Garland led Cleveland with 22 points, six assists, while rookie Evan Mobley netted 19 points and grabbed nine rebounds. Ricky Rubio added 16 points and seven assists off the bench for the 9-5 Cavaliers.
The Celtics had a 52-38 lead at the break after a Williams alley-oop dunk from Smart before the buzzer to end the first half. Schröder, who picked up where he left off Friday night, had 19-points in the first two quarters, after coming off a season-high 38-point performance against the Bucks.
Boston was up 72-53 with 3:05 left in the third, but the Cavs used a 24-4 run to go ahead 77-76 with 6:43 left to play. There were five lead changes and seven ties the rest of the way.
Schröder hit a driving layup with 1:59 remaining to put the Celtics up 87-85 and Tatum connected on a 19-foot jumper to the game 89-89 with 29.4 seconds left on the game clock. Following a pair of made free throws by Garland, Schröder missed the final shot in the final 9.4 seconds out of a timeout.
After scoring only nine points in the first period and 38 for the half, the Cavaliers outscored Boston 53-37 in the last two quarters, despite shooting 38.3% from the field for the game. This is Cleveland's best start to a season in five years.
The Celtics, who committed 20 turnovers, will look to get back to .500 when play this same Cavs team on Monday night.
Joel Pavón
Follow @Joe1_CSP