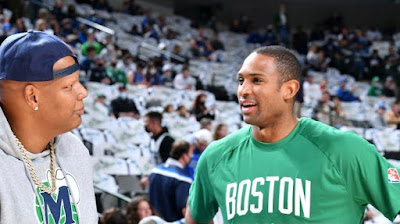 The Celtics have had some time to process a 107-104 loss to the Dallas Mavericks after Luka Donic hit a buzzer-beating 3-pointer to snap the C's a two game win streak Saturday night.
Despite falling to the Mavs and nearly pulling off a 19-point comeback, Boston returned home from their mini road-trip with a 2-1 record, plus what also seems like a renewed sense of effort and intensity that was lacking just a week ago -- when they were 2-5 to begin the season.
Following team shootaround on Monday afternoon, Al Horford made himself available to the media, as he spoke about the Celtics' improvements, which includes a dramatic change on defense.

"Their has been an understanding of what we're trying to do," Horford said during his post-practice presser. "Sometimes things you expect guys to know and pick up kind of gets lost in translation. We figured it out pretty early that we needed to be more consistent defensively and pay attention to the details.

"Normally when you're not switching all the time, there's usually only two people communicating, things are going so fast (w/ switching), if you're not talking you're going to get exposed out there."

On the subject of Jaylen Brown missing the next 1-2 weeks with a right hamstring strain, Horford was clear on what has to happen going forward and how he'll contribute in the locker room.

"Jaylen was playing so well, starting to get his legs under him and trying to get a feel for everything," said the Celtics veteran about his teammate. "This is going to give some opportunities for some of other guys to step in, these kind of things happen and we just have to come more together."
Horford also added: "At the end of the day, I try to come in here, work hard, lead by example ... treat how I want to be treated ... when I want to say something, there's this mutual respect ... sometimes I'll ask them questions, we're learning from one another."

While it seemed like the sky was falling after a 128-114 home loss to the Chicago Bulls last Tuesday night -- where the Celtics blew a 19-point lead -- the defense has since limited their last three opponents to an average of 88 points on 39.7% shooting from the field.
A positive change that Robert Williams credits teammate Horford for, who, Williams says pulled the team together for a talk following the Celtics' loss to the Bulls.

"Defensively and offensively, and off the court, Al (Horford) has been a great attribute for us, obviously," Williams said during his Saturday pregame presser. "He was there my rookie year. He's an anchor, man. He the O.G. after the game we lost -- the home game -- he sat us all down. He told us "winning ain't easy, if everybody could do it, they'd be winning."
"He told us to embrace it. Embrace the loss, embrace the mess-ups. Just keep pushing."

It's unclear if Horford spoke during or before the Celtics reported players-only meeting, that came about after Marcus Smart's controversial comments.
Meanwhile, Horford is off to a great start since his return to Boston, the veteran big is averaging 13.5 points, 9.4 rebounds, 3.3 assists and 2.6 blocks per contest.
The Celtics at 4-6, are back home -- where they're still winless -- on Wednesday, when they host the Toronto Raptors before the NBA champion Milwaukee Bucks come to town Friday.
Joel Pavón
Follow @Joe1_CSP