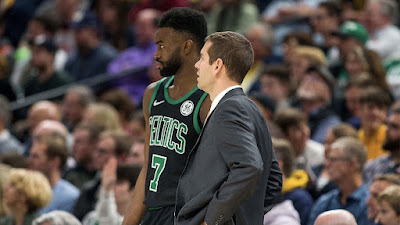 Brad Stevens dismissed the rumor that the Celtics were talking to the Philadelphia 76ers about a potential trade for Ben Simmons that would have to include Jaylen Brown.
On Thursday, the C's president of basketball operations spoke about the recent report by The Athletic's Shams Charania during his weekly appearance on 98.5 The Sports Hub.

"Obviously, if there is something that gains enough steam or gains enough media attention, then you want to have conversations with the people in your building just to make sure that they know what's real," Stevens added.

While it wouldn't be the first time Brown's name has been in trade rumors in the past, Stevens said "I don't think he thought twice about it," but also mentioned that the two had a conversation regardless.

"I just walked up to Jaylen and said, 'Hey, your name's all over the place, as you know,'" Stevens explained. '"Obviously, from our standpoint, you're a Celtic and a guy that we obviously we think exceptionally high of, and, you know, nothing doing.' I just wanted to make sure he had that peace of mind."

Brown, who's averaging a team-high 25.6 points on 49.3% shooting from the field and 39.7% from 3-point range this season, has missed his third straight game so far after sitting out of the Celtics' overtime win against the Milwaukee Bucks with a hamstring strain.
Joel Pavón
Follow @Joe1_CSP