Ime Udoka gives update on Jaylen Brown ahead of rematch vs. Cavs 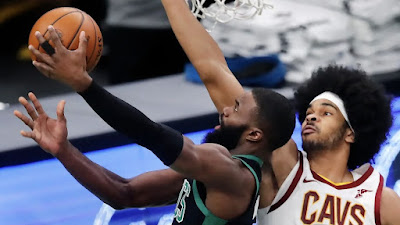 Ime Udoka spoke to the media Monday morning after shootaround ahead of the Celtics rematch against the Cleveland Cavaliers.
The C's coach gave an update on Jaylen Brown and his hamstring strain, ruling out the All-Star for tonight's game, despite Brown saying Saturday he was hopeful to return depending how his body responded with the next 48-hours.

Brown missed his fourth straight game, as the Celtics blew a 19-point lead to the Cavaliers Saturday and got their two-game win streak snapped.
Udoka added that Al Horford (lower back) and Josh Richardson (knee), who also were out against the Cavs two days ago, are good to go tonight.
The Celtics coach was also asked about Enes Kanter and if him not getting much playing time so far this season had anything to do with the center's recent anti-China tweets and even one that mentioned him not seeing the court much.

"I've talked to him, and I saw (his posts)," explained Udoka when asked if Kanter's politics have impacted his playing time. "The thing I tell players is that we have a lot of guys who aren't playing, could be playing, and want to play."

Udoka also noted that a lot of the minutes in the middle are being gobbled up by Horford and Robert Williams as well.

"I've been through the same situation as a player. But our playing time reasoning is strictly based on basketball. And I've talked (about) this (with) him, the reasons he's not playing as much in some of the things we're doing defensively and in areas for him to improve on and so, my thing is strictly basketball. We're switching a lot and doing some things that probably are not as natural for him. And that's limited his time to some extent, but at the same time, it's not just a result of what he's not doing, other guys are doing well."

Udoka made it clear that his rotation is in no way influenced by anyone's politics saying "we want to find the minutes, but other guys are playing well and to this point is strictly basketball thing."
Last month it was reported that Celtics games got taken off the air in China due to Kanter's pro-Tibet comments via Twitter. Neither the team or the NBA have made a statement regarding the Turkish big man's anti-Chinese government posts.
Joel Pavón
Follow @Joe1_CSP