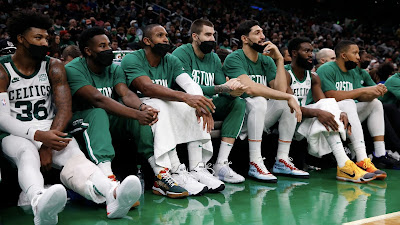 The Celtics reportedly held a players-only meeting following their 128-114 loss to the Chicago Bulls Monday and Marcus Smart's controversial comments.
According to ESPN's Adrian Wojnarowski, the meeting took place in Orlando Tuesday night and it accomplished very little.

"[Marcus] Smart, [Jayson] Tatum, [Jaylen] Brown, they did talk about the collapse against the Bulls and Marcus Smart's comments after the game about those two not passing the ball," Wojnarowski said on ESPN. "It was emotional at times, but in the end, perhaps not a terribly productive meeting. Maybe not even beneficial."

The Celtics blew a 19-point lead against the Bulls at TD Garden and were outscored 39-11 in the fourth quarter. Smart responded to a question on how he could help improve the offense, by saying the team needed to move the ball more on offense and it begins with Jayson Tatum and Jaylen Brown.

"I think everybody's scouting report is to make those guys try to pass the ball," Smart said Monday in his postgame comments. "They don't want to pass the ball and that's something that they're going to learn. They're still learning and we're proud of the progress they are making, but they are going to have to make another step and find ways to not only create for themselves but create for others on this team."

Per Woj's report, the issues within the Celtics locker room are nothing new since the Disney World Bubble -- where there was a huge locker room blowout after a Game 2 loss and trailing 2-0 in the Eastern Conference Finals against the Miami Heat. Media members that were present reported that players were heard yelling and throwing things.

"These are issues with this team and this group that have been going on for a while," Wojnarowski said. "They changed the president in Boston. They changed the head coach. These issues remain and now at 2-5 and playing the Magic tonight, Ime Udoka -- the first year Boston head coach -- this is a situation he has to address and help this team work through the way that Brad Stevens and it haunted his regime, especially near the end last season."

Celtics president of basketball operations Brad Stevens said that Smart spoke to Tatum and Brown soon after the comments were made, while coach Ime Udoka spoke to reporters prior to the Celtics tip-off against the Orlando Magic Wednesday night and said the situation had been addressed.

Some of the things he talked about are things we've talked about every day. Marcus, Jaylen [Brown] and Jayson [Tatum] have a long history together, it's nothing new," said Udoka in his pregame presser. "Every team I've ever been on or coached have had moments where they've butted heads ... don't want to blow it out of proportion."

However, Woj's report came out in the middle of the Celtics taking on the Magic and Udoka was asked to clarify if the meeting actually took place following a much needed win. According to the C's coach, it wasn't a players-meeting, but instead a scheduled team dinner and the players had some time prior to the coaches joining.
The Celtics, who are off to 3-5 start, face the Heat (6-1) Thursday on a second night of a back-to-back before they head to Dallas on Saturday.
Joel Pavón
Follow @Joe1_CSP