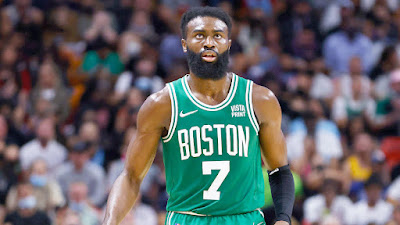 Jaylen Brown spoke to the media for the first time Wednesday morning since Ime Udoka announced that the All-Star wing would be out 1-2 weeks with a right hamstring strain.
While the Celtics leading scorer suffered the injury in the third quarter of the team's blowout victory over the Miami Heat six days ago, it appears Brown's timetable could be sooner than expected.

"It's getting better," Brown said of his hamstring. "I tried to explode off and I felt a pull. It's a Grade 1, so it's nothing severe."

Brown was asked if he was in any pain, to which he answered: "Without pain. Still got some tightness, but no pain."
The Celtics are being cautious with Brown, especially since he had the same injury occur in March of 2020, just prior to the league being suspended due to the COVID-19 pandemic. According to Brown, this current hamstring strain is a re-aggravation of that previous injury, saying, "I'm not overly concerned about it, but I do want to make sure it's not an ongoing issue."

"This one being a reoccurring injury, I want to take the proper precautions to make sure that 1- I have my hamstring for the next ten to fifteen years and 2 - this is not an issue going forward where I have to be away from the team," Brown added.

"I think we're moving in the right direction. I'm pissed that I have to spend so much time away from the team through COVID and quarantine and now with a hamstring injury so early," Brown said after practice. "We're definitely building in the right direction. I loved our energy and our spirit in Dallas, especially in the second half. Luka hit a tough shot, but nothing to hang our heads. We'll just focus on the next one, Toronto, and keep building from there. The spirit of this team is different and we're going to continue to keep pushing. I can feel it. Things will turn around for sure."

The Celtics have had three days off since their last game in Dallas, as they prepare to host the Toronto Raptors tonight at TD Garden, where they haven't won yet this season.
Joel Pavón
Follow @Joe1_CSP