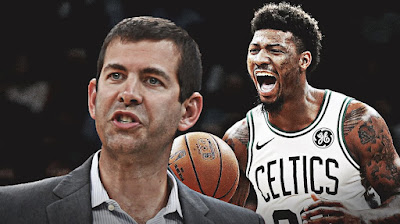 Brad Stevens has come to bat clean up in the wake of Marcus Smart's controversial comments following the Celtics' ugly 128-114 loss to the Chicago Bulls Monday night.
According to the team's president of basketball operations, Smart spoke to Jayson Tatum and Jaylen Brown after his postgame remarks.
Stevens told Michael Holley of NBC Sports Boston, that he saw Smart and Tatum eating breakfast Tuesday morning and talking about how the team can come up with solutions to their early season struggles.

"Those guys want to win," Stevens said in an exclusive interview Tuesday. "And at the end of the day, I think that that's the most important thing."

The Celtics are currently 2-5 and winless at home after an historic fourth quarter collapse to the Bulls, where they blew a 19-point lead and became the first team to lose by 14 after leading by the same margin to start the final frame. When Smart was asked how the offense could shape up, the veteran guard responded by saying there wasn't much he could do standing in the corner when the ball doesn't move and opposing team's zero in on your All-Stars.

"Every team knows we are trying to go to Jayson and Jaylen, and every team is programmed and studied to stop Jayson and Jaylen," Smart said Monday night. "I think everybody's scouting report is to make those guys try to pass the ball. They don't want to pass the ball and that's something that they're going to learn. They're still learning and we're proud of the progress they are making, but they are going to have to make another step and find ways to not only create for themselves but create for others on this team, to open up the court for them later in the game where they don't always have to take those tough shots or take tough matchups when they do get the 1-on-1 and see a trap. Just reading that.

On Tuesday, Stevens told Holley that he does feel better about this group of Celtics rather than last season when the team got off to an 8-3 start.

"Right now at 2-5, I feel a lot better from a structural standpoint at 2-5," Stevens said. "It's a long year, there's 75 games left. Every loss and every moment gnaws at you and eats at you, but my responsibility is to look at it from a 10,000-foot view and not make those decisions based on a tough 14 minutes in a basketball game."

While it's only a small sample size with a new coach in Ime Udoka and this current roster, the Celtics are off to their worst start since the 2006-07 campaign, ironically the season before they won their only championship in over 35 years.
With Tatum, Brown and Smart set up to be the core of the future for the franchise, it won't stop the speculations of potential trades, especially if the Celtics are seeking a third All-Star to create another 'Big-3.'
C's fans can breathe a little easier if the Celtics pick up a couple of wins on this mini road trip that begins Wednesday in Orlando and Miami on Thursday for a back-to-back, followed by Dallas on Saturday night.
Joel Pavón
Follow @Joe1_CSP