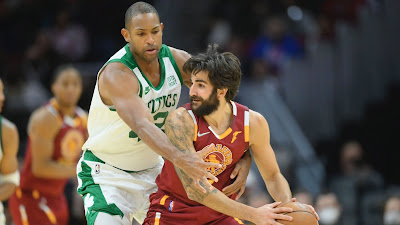 The Celtics split their two-game set with a 98-92 win over the Cleveland Cavaliers Monday night at Rocket Mortgage FieldHouse.
Jayson Tatum finished with 23 points, eight rebounds, five assists and two blocks to lead Boston back to a .500 record of 7-7.

"That last game didn't leave a good taste, so we wanted to get back to our winning ways," Tatum said during his postgame presser. "You've got to find a way, whatever it takes, and we competed and had good communication. I think we're all starting to get on the same page."

Both teams were playing their third game in four nights, with the Celtics winning the rematch after blowing a 19-point advantage in a 91-89 loss to the Cavs Saturday night.
Al Horford had 17 points, nine rebounds and two blocks in his return from lower back pain, while Marcus Smart (five assists) and Dennis Schröder each scored 14 points.

The fact that we stayed with it, we didn't get rattled. They were making some tough shots down the stretch," Horford said in his postgame comments. "Some really good defense. Calls didn't go our way, just our group being poised and I think for us that starts a lot with Jayson (Tatum). He's pretty calm in those moments. We stayed pretty calm throughout, and that starts with Jayson because we just kind of follow him."

The shorthanded Cavaliers were playing without Jarrett Allen (non-COVID illness) and Collin Sexton (knee), as Ricky Rubio had a game-high 28 points. Cedi Osman scored 26 points and Darius Garland added 17 points for Cleveland, who are 9-6 on the season.
Neither team shot particularly well in the first half, as both hit a combined 37.5% of their field goals and the Cavs led by as many as 11 and was up 39-37 at the break.
It was a battle between Tatum (10 points) and Rubio (14 points) in the third period, which featured five lead changes and seven ties, before the Celtics took a 65-64 advantage into the final frame.
Cleveland rallied back from a nine-point deficit and seemed to grabbed a 90-88 lead with 1:51 left to play, but Denzel Valentine's foot stepped out of bounds. Schröder scored back-to-back shots and a pair of free throws after a Horford layup to give the Celtics a 10-4 run and the victory with 19 seconds left.

"I think we've been through every late-game situation so far," coach Ime Udoka said after the game. "It's good that we pulled away at the end."

Boston shot 46.2% from the field and limited the Cavaliers to 38.6% shooting, while also outscoring Cleveland in the paint 42-28.
The Celtics will head to Atlanta Wednesday to take on the struggling Hawks (6-9) before going back home to host the rival Los Angeles Lakers Friday.

Robert Williams was ruled out for the rest of the game when he exited in the first half with a sore left knee, Udoka said that it's "just has some knee soreness. He felt something and we got him out."
Enes Kanter made an appearance Monday, his first since October 30, scoring five points to go along with two rebounds in eight minutes of action. Earlier in the day Udoka cleared up that the only reason the center has barely played this season was purely for basketball reasons and nothing to do with his recent political comments.
Joel Pavón
Follow @Joe1_CSP