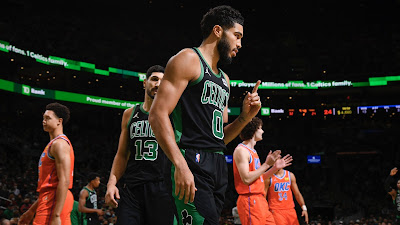 The Celtics beat the Oklahoma City Thunder 111-105 Saturday night for back-to-back victories at TD Garden.
Jayson Tatum led all scorers with 33 points on 11-of-22 shot attempts and 6-of-12 from deep, making it the third straight game the All-Star forward has hit the 30-point mark on 50% shooting or better.
The revenge tour of Dennis Schröder playing against his former teams concluded with a 29-point performance on 13-of-22 from the field. The veteran guard in the last three outings has averaged 21.6 points and 55.4% shooting starting in place of Jaylen Brown, who has been sidelined the last eight games with a hamstring strain.
Grant Williams had 14 points, including 4-of-6 from 3-point territory in his third consecutive start for center Robert Williams (knee). Al Horford added 10 points, 11 rebounds and seven assists. Enes Kanter recorded his first double-double of the year with 10 points and 10 rebounds for the Celtics - who are above .500 for the first time this season at 9-8.

"I think we're starting to understand the level that we have to play night in and night out," Horford said to the reporters after the game.

After coming off an emotional blowout win over the Los Angeles Lakers on Friday, the C's nearly forfeited a 25-point lead last night when Oklahoma City cut the deficit to single digits with just under four minutes left to play.

"We knew it was a big game last night," Boston coach Ime Udoka said. "But it didn't matter if we came out with a dud game."

Lu Dort scored a team-high 16 points, while Josh Giddey had 15 points and eight rebounds. Shai Gilgeous-Alexander struggled to get any offensive rhythm going, hitting 4-of-13 from the field for 14 points and Jeremiah Robinson-Earl chipped in 13 points, eight rebounds for the Thunder, who fell to 6-10 on the season.
The Celtics had a 58-45 advantage at halftime and pushed it up to 20 on a Horford 3-point play to start the third period. Oklahoma City responded with two unanswered 3-pointers, but the C's used a 13-2 run to remain ahead.
Boston was in control to start the final frame and led 96-80 with 8:27 left to play before the Thunder went on a 12-4 run to cut their deficit to single digits for the first time since the opening quarter.
Udoka emptied his bench with 50.9 seconds left and with the Celtics leading 109-98. OKC's one last rally fell short, despite outscoring Boston 7-2 and even forcing the C's starters to re-enter the game to secure the win in the final seconds.

"We just have to keep that intensity up throughout the entire game," Grant Williams said in his postgame comments about playing a young team like the Thunder. "Tonight, I think it was just us focusing and keying on what we were doing well."

The Celtics tie a season-high with the two-game win streak and have won seven of their last 10. They'll continue their homestand on Monday against the Houston Rockets (1-15).