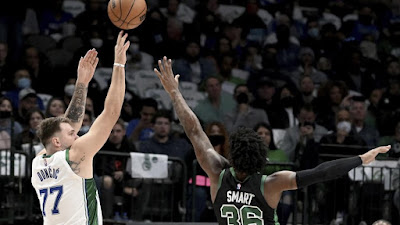 The Celtics 19-point comeback rally fell short Saturday night, after Luka Doncic hit a game winning 3 as time expired to give the Dallas Mavericks a 107-104 win at American Airlines Center.
The 22-year old All-Star grabbed the inbound pass with 11 seconds to play, dribbled past halfcourt before getting to the left wing and let a high-arcing 3-pointer fly over former Mavs teammate Josh Richardson for the victory as the clock hit triple zero.

"I think I guarded it well," said Richardson during his postgame presser. "He's hit game-winners quite a few times. It's tough, but you've got to give credit where it's due. Good defense. Better offense."

Doncic, who battled fellow All-Star Jayson Tatum throughout the night, finished with 33 points on 12-of-21 makes from the field and 5-of-10 from deep, to go along with nine rebounds and five assists.
Kristaps Porzingis scored 15 of his 21 points in the second half, including a game-tying dunk late in the fourth and even blocked a Dennis Schroder layup on the very next play that would have put Boston ahead with just over minute left, that eventually led to Doncic's final shot and a 6-3 record for Dallas.
Tatum bounced back from two horrible shooting performances (combined 7-of-29) earlier in the week to record 32 points on 12-of-19 from the floor and 6-of-8 from 3. Dennis Schröder had 20 points and six assists, as he filled in for Jaylen Brown, who was sidelined with right hamstring tightness.
Robert Williams added 16 points, eight rebounds and Al Horford chipped in 14 points for the Celtics, who are now 4-6 on the season.
Boston trailed 57-40 at halftime before using a 19-4 run -- 10 straight unanswered came from Tatum alone during that span -- to cut their deficit down to two with 5:57 left in the third.
The Mavs responded and didn't surrender their lead, as the Celtics still trailed 79-72 going into the final frame.
Marcus Smart hit a 26-foot 3 to give Boston a 104-102 lead -- its first of the night with 2:12 left to play. It was short lived once Porzingis tied it up on a dunk and blocked Schröder on the next play. Boston had a chance to take another lead following a miss 3 by Reggie Bullock and a Tatum rebound.
However, Smart missed a floater and the Mavericks called a timeout with 16.6 seconds left. With eight ticks left on the shot clock, Smart fouled Doncic leaving five seconds left on the shot clock since the Celtics had a foul to give. The foul gave Dallas one last possession, setting up Doncic's game clincher and snapping the C's two-game win streak.

"I've got to communicate that to everybody so everybody knows," said Celtics coach Ime Udoka postgame.

Despite Boston hitting 48.8% from the field, the Mavericks made 52.6% of their attempts, after limiting the Magic and Heat to an average of 33% overall shooting in their previous back-to-back games.
The Celtics conclude their three-game road trip with a 2-1 record, as they'll return home Wednesday to host the Toronto Raptors at TD Garden -- where they are still winless this season.

Celtics were outrebounded 40-36, but outscored the Mavs 54-40 in the paint. Boston assisted 20 times on 42 made baskets, despite shooting 9-of-31 from 3. Josh Richardson returned from a foot contusion that kept sidelined against the Heat, to score 13 points against his former team.
Joel Pavón
Follow @Joe1_CSP