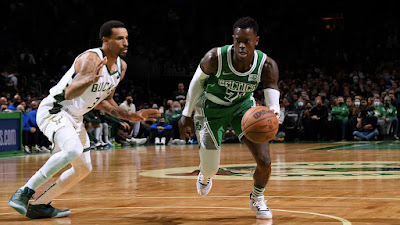 The Celtics took full advantage of a shorthanded Milwaukee Bucks team without Giannis Antetokounmpo, beating the NBA champs 122-113 in overtime Friday night at TD Garden.
Dennis Schröder finished with a game-high 38 points (three shy of his career-best) on 16-of-27 shooting to go along with eight rebounds in 41 minutes of action.

"He got hot late, and we kind of rode his hand there," Ime Udoka said of Schröder, who scored eight points in OT. "He had a great night tonight, which we needed."

Jayson Tatum netted 27 points on 10-of-25 from the field and 11 rebounds for the Celtics, who after starting the season 2-5, have won four of their last five.

"There's always a natural letdown. That was the message before the game," Udoka said after Milwaukee was also without All-Star Khris Middleton. "The other guys are going to play hard and come in with a 'nothing to lose' attitude, and they did."

Marcus Smart scored 12 of his 19 points in the third period, while Robert Williams added another double-double of 12 points and 10 rebounds to help the Celtics get back to .500 at 6-6.
Jrue Holiday recorded 17 points, 13 assists for Milwaukee and Bobby Portis scored 22 points. Grayson Allen had 21 points and Massachusetts native Pat Connaughton added 15, as the Bucks fell to 6-7.
The game featured 22 lead changes and eight ties in the first 30 minutes before the Celtics used a 13-2 run to take a double-digit lead for the first time on their way to a 37-point third quarter.
Boston had a 106-100 advantage with 1:13 left in regulation when Allen hit a 3-pointer and Tatum turned the ball over that led to a George Hill putback of a Holiday missed jumper to cut the deficit to one.
After Schröder hit a floater, Allen sank another 3 on the other end to tie it up 108-108 with 14 seconds left in the fourth. Tatum's mid-range shot fell short which led to Boston's sixth overtime session in 12 games so far this year.
It was all Schröder in the overtime, hitting a clutch shot and a pair of free throws while the Garden crowd chanted "M-V-P!" as the Celtics outscored the Bucks 14-5 in the extra five minutes.

"That's just great," Schröder said in his postgame presser. "But for me, that doesn't count. I need a win, and that's what we got."

The Celtics hit 49% of their shot attempts, outscoring the Bucks in the paint 62-42 and won the rebounds battle 53-39.
Boston will head to Cleveland Saturday night to take on the Cavaliers (8-5) in the second game of a back-to-back and once again on Monday.

Game Notes:
The Celtics committed 13 turnovers while the Bucks turned the ball over 13 times and shot 44.9% from the field and 16-of-47 from deep.
Joel Pavón
Follow @Joe1_CSP