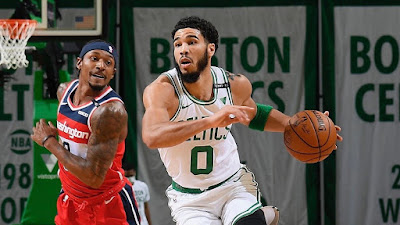 Celtics All-Star Jason Tatum has reportedly tested positive for COVID-19, according to Gary Washburn of the Boston Globe.
Tatum received the positive COVID-19 test Friday night and immediately went into quarantine following the team's 117-106 win over the Washington Wizards, per Washburn's report. Mark Murphy of the Boston Herald, reported that the forward is still awaiting the results of a confirmation test and is asymptomatic.
With this positive COVID-19, Tatum is likely to quarantine for the next 10-14 days. News of Tatum testing positive comes less than 24-hours after Celtics big man Robert Williams III reportedly tested positive for the coronavirus.
Center Tristan Thompson and forward Grant Williams are also in quarantine for at least seven days as of Friday due to the NBA's health and safety protocols, which includes tracing and close contact off the court. Washburn was told by a league source that Robert Williams, Grant Williams, Thompson, and guard Carsen Edwards all shared a car ride on the team's last road trip. Edwards was the only one in the car wearing a mask and was cleared to play against the Wizards because he wasn't considered a close contact.
The Celtics canceled Saturday's practice and closed the Auerbach Center once Tatum's positive test was confirmed. Boston is scheduled to face the Heat on Sunday, while players and other members of the organization were tested twice on Friday, according to Washburn.
Wizards' guard Bradley Beal missed the team's game against the Heat on Saturday due to being in close proximity with Tatum following the Celtics victory over Washington on Friday. Beal's potential exposure forced the league to investigate, according to Shams Charania of The Athletic.

This is part of health and safety protocols investigating potential exposure that occurred when Bradley Beal and Jayson Tatum were speaking in close proximity on the court postgame Friday night, sources said. https://t.co/42fYb8Yesc

Tatum being out for the next two weeks, potentially means the Celtics will be without their young star for up to seven games if he's out the full 14-days. He leads the team in scoring at 26.9 points per-game, which is currently eighth best in the league.
The Celtics now have just 11 players (including two-way players Tacko Fall and Tremont Waters) available to play. The NBA requires teams to have at least eight players active in order for games to be played.
Joel Pavón
Follow @Joe1_CSP