Marcus Smart, JR Smith each fined for their preseason scuffle 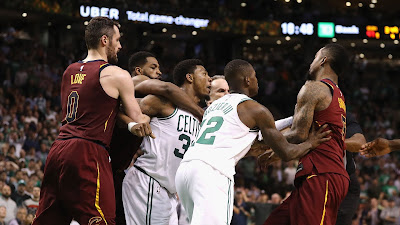 The NBA has fined Marcus Smart and JR Smith for their roles in an on-court scuffle during Saturday's Celtics preseason finale against the Cavaliers.

Smart was fined $25,000 for escalating the altercation by shoving Smith from behind. Smart was given a technical foul and ejected with 3:38 remaining in the first quarter of the Boston's 113-102 loss to the Cavs.

Smith, who was also hit a technical foul for shoving Celtics big man Aron Baynes, was fined $15,000 for initiating the altercation.

Smith and Baynes tangled arms and locked elbows while boxing out in the paint for a rebound, before they began shoving each other.

Smart then came to aid of his teammate before being held back by Jayson Tatum and Terry Rozier, to the point that Smart was brought down to the floor to keep from going after Smith.

Smith made a "whatever, keep talking" motion with his hands, smiling, while Smart appeared to point to the back when he walked off the court.


Marcus Smart: "I did the action so whatever consequences come with it, come with it." - Here's what else he had to say after being ejected pic.twitter.com/IGFmj9tbkp
— Celtics on NBC Sports Boston (@NBCSCeltics) October 7, 2018