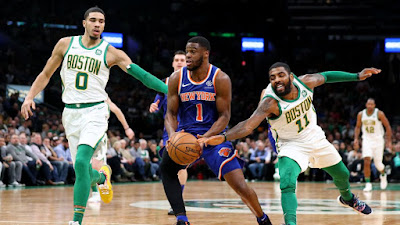 Celtics All-Star guard Kyrie Irving is starting to see changes in his team. The kind of attitude adjustment from his teammates that needed to be corrected, according to him, if they plan to contend long-term.

Boston, in the midst of a four-game winning streak following Thursday's 128-100 win over the Knicks, are clicking at just the right time. After falling to the bottom half of the Eastern Conference with a 10-10 record, the streak has bumped them up to a top-five team in the east and they've blown teams out in the process.

For four consecutive nights, the Celtics have scored at least 118 points. While they're beating up on teams that aren't the best squads the league has to offer, that's the type of consistent production they had been desperately looking for.

Offensively, the changes made by Brad Stevens are paying off. The revamped starting lineup that now features Marcus Smart and Marcus Morris is still undefeated and Irving isn't hiding how much he's enjoyed it.

He complimented Smart's grit on both ends of the floor, Morris' energy in the front court and Thursday night he expressed how impressed he's been with the second unit. Gordon Hayward netted 30 points Saturday night in Minnesota and on Thursday night it was Jaylen Brown's 21 points off the bench.

Irving is seeing his team turn things around and talked about the biggest problem that plagued the Celtics out of the gate.


"I think the important thing to take away from our struggles early on was how much fun we weren't having," Irving said. "It just wasn't fun. It just wasn't good basketball. We weren't cheering for one another, we weren't doing little things. I know certain guys who would probably be fearful of talking about it but it goes on in every locker room where guys have egos or guys that think that their best way of winning.

"You have the coaches; they have their best way. You have the GM, president, everyone feels like they have an ego in this when all in all we just want the best for each other."

Irving has pretty much seen it all throughout his NBA career. From leading a bottom-feeding lottery team in his early years to playing second fiddle to LeBron James and hitting a game-winning shot to claim his lone title, he bring loads of experience to a relatively young Celtics team.

However, compared to what he saw early on this season, Irving is seeing a different team now -- one that he believes is starting to pick up the right traits for a group with championship aspirations.


"I think at this point we're playing with a sense of effort where now it's not about who's playing or who has more talent," Irving said. "Now it's like 'OK, who's gonna give that effort every single time down? Who's gonna demand it from one another and hold each other accountable?' and when you go from there you start picking up some great championship habits."