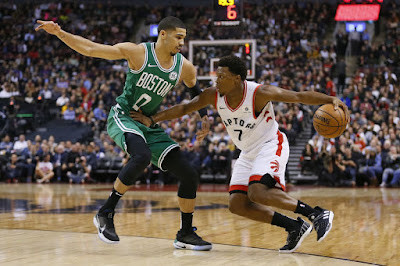 Another loss for the Celtics; more telling quotes by a player and head coach.

Brad Stevens and Marcus Smart opened up to reporters in Toronto following Tuesday night's 118-95 blowout loss against the Raptors. When the Celtics head coach was asked about what kind of themes has his team struggled with, he replied with one of his most honest answers of the season.


"We have to be a lot more connected as a team," Stevens said. "That's been a theme for a while."


"We're just not together," Smart stated. "Not together at all."

When Stevens was asked about the Celtics' struggles on the defensive end of the floor, he explained that his team took shortcuts against Toronto -- a comment that fell on deaf ears with at least two of his players.

Forward Marcus Morris delivered a long pause when Stevens' comments were mentioned before saying, "next question" to the scrum of reporters. Interesting responses from two members of the starting lineup.

Typically, when a Stevens quote is relayed to his players it's usually met with a warmer response but not this time as the frustrations of the Celtics turning in another one of their worst losses of the season truly resonated within the team. From the outside, it appears that Irving and Morris' dismissive attitudes in their respective responses would suggest they didn't quite agree with their coach's defensive assessment of what went wrong against the Raptors.

However, Toronto's second-quarter dominance offensively made all the difference in Tuesday's game. The Raptors outscored the Celtics, 36-13 in the second frame, including an 18-0 run that ultimately led to a 31-point advantage in the second half.

Raptors head coach Nick Nurse certainly did his research prior to Tuesday's matchup as there was an emphasis on outside shooting -- a glaring weakness within the Celtics' defense that was exposed early and often throughout the night. Toronto finished 17-of-36 from behind the arc while Pascal Siakam scored a game-high 25 points and Kawhi Leonard added 21 points.

Marcus Morris led the Celtics with 17 points, while Jayson Tatum and Kyrie Irving each finished with 11 points before watching the rest of the game from the end of the bench at the end of the third quarter.

When the Celtics opened its locker room doors to the media, Irving was reportedly seen alongside Danny Ainge in his locker before the two wrapped up their conversation as Ainge made his way out. No telling what the two were discussing, however, Irving's brief and scrum that was filled with some of the shortest answers we've received from the All-Star point guard this season is certainly and indication of just how upset he was with Tuesday's loss.

Boston has little time to dwell over it. Its three-game homestand at TD Garden kicks off Wednesday night when they welcome Damian Lillard, C.J. McCollum and the Trail Blazers.

Raptors: Toronto took advantage of the Celtics' missed shots and turned them into 29 fast-break points. Its bench combined for 45 points, led by Norman Powell (11), Jeremy Lin (8) and Patrick McCaw (6).