Gordon Hayward sprains ankle, 'unlikely' to play against the Bucks 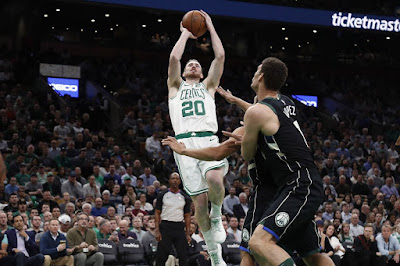 Celtics forward Gordon Hayward is “unlikely” to play against the Milwaukee Bucks, according to coach Brad Stevens.

Stevens spoke to the media at the Red Auerbach Center during the team's shootaround on Thursday morning and gave an update on Hayward's ankle. The former All-Star was listed as questionable after suffering a right ankle sprain while playing one-on-one with teammate Semi Ojeleye on Tuesday at the Celtics practice facility.


"It was definitely frustrating,” Hayward said. "But I don’t think it’ll be that big of a deal. I’ll be all right."

Despite the injury being to Hayward's right ankle, not the left ankle, which was surgically repaired in October of 2017 following a devastating injury five minutes into his Celtics career, Stevens believes it's "not a long-term thing."


"We anticipate that he'll be back within a short amount of time," Stevens said.

If Hayward is unable to go against the Bucks, the Celtics have already re-called two-way signee RJ Hunter to suit up in his place. Hunter is averaging 14.1 points in 12 games for the G-League Maine Red Claws. He has yet to make an appearance this season for the Celtics, but played 36 games for Stevens during the 2015-16 campaign.


"I always pay attention to those guys,” Stevens said. "I’m a lot less concerned about what they’re doing from a statistical standpoint … but more [focused on] are they ready to come and play in what we’re trying to accomplish? I think RJ’s familiarity helps that anyway, and it probably makes that transition ever smoother."