Kyrie Irving to re-sign with the Celtics next summer 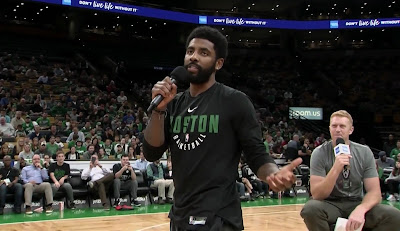 Celtics fans could be heard all over Boston on Thursday night, in what can only be described as sounds of joy, then mostly likely a sigh of relief, following Kyrie Irving's announcement that he plans to re-sign and remain in Boston next year.

During the Celtics' annual Tip-Off event at the TD Garden, the All-Star put to rest a rumor-filled offseason of speculation and most likely avoid a year long of craziness surrounding the team on a nightly basis of questions concerning Irving's summer plans.


Shams Charania of The Athletic reported shortly afterwards that Irving spoke to Celtics management about his intention to re-sign with the club over the past few weeks.

Sources: As Boston star Kyrie Irving says at Celtics fan event that he plans to re-sign with the team next summer, Irving has also communicated with Boston ownership over past several weeks and verbally committed plans to stay long-term.
— Shams Charania (@ShamsCharania) October 4, 2018


Though the agreement is only a verbal one, it comes as no surprise from Irving to make such an announcement since saying nothing but positive things about the Celtics and the city of Boston, especially since the start of training camp.

Sources: Kyrie Irving has met with Celtics ownership and has been direct with his message to Boston's brass over past few months: He's committed long-term to the franchise.
— Shams Charania (@ShamsCharania) October 4, 2018


Paul Pierce was also in attendance to witness first hand the Garden's reaction to what Irving had to say. 'The Truth,' a future Hall-of Fame inductee, knows how important it is to commit to a historic franchise such as the Celtics.


"I think that's huge. I think [Irving] has an understanding after being here a year, it's all about legacy. To have a legacy here in Boston, it could be like none other in the NBA."

Irving, who played in only 60 games during the 2017-18 campaign, has expressed the desire to hang championship banner No. 18 and possibly have his No. 11 one day raised to the Garden rafters as well.


"What more can you ask for?" said Irving on Friday. "An organization taking a chance as well as getting me out of Cleveland, taking a chance regardless of whether or not I'd re-sign. They just want me to find out what being a Celtic is all about and I absolutely did. I believe in the franchise and the organization."

The Celtics tip-off their regular season on October 16, when they host the Philadelphia 76ers.


Watch Irving address the media below on his decision to re-sign with the Celtics: