Kyrie Irving on his commitment to Celtics: 'Ask me on July 1' 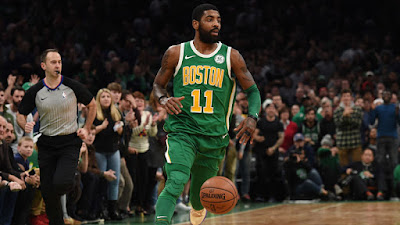 Before the start of the 2018-19 regular season, Kyrie Irving let fans who attended an open practice at the TD Garden know of his intentions to re-sign and remain in Boston long-term this summer, putting an end to any speculation about the future.

After a 10-10 start and having the fifth best record in the East for most of the year (currently tied for fourth), its been an up and down campaign for the Celtics that most didn't see coming. Irving publicly called out his teammates, only to later apologize to them for his comments, while also admitting to phoning his former running mate LeBron James to tell him how he now understands what James went through during Irving's early years in Cleveland.

Now that Anthony Davis has asked to be traded earlier this week, followed by rumors that the Pelicans' All-Star does not want to be dealt to Boston because of the "uncertainty" of Irving committing to Celtics beyond this season, has the basketball world suggesting a possible reunion between Irving and James in Los Angeles.

Plus when you throw in the fact the Knicks, who the Celtics face at Madison Square Garden tonight, have cleared up cap space by dealing Kristaps Porzingis, Tim Hardaway Jr., Courtney Lee and Trey Burke to Dallas less than 24-hours ago, it's obvious New York is all in to try and sign two max-contract free agents.

Did we mention that Irving has been linked to the Knicks already this season?

Friday morning, Kyrie Irving was finally available to address such reports about him possibly going back on his word, after nursing a hip injury this week.

While Irving did say Boston remains "at the head of the race" to retain his services, it seems like he's wavering a bit from his initial commitment back in October when there were clear championship aspirations.


"Well, at the end of the day, I’m going to do what I feel is best for my career. And that’s just where it stands. My focus this season is winning a championship with the Boston Celtics. Obviously we had goals coming into this season, and the primary goal is to win a championship. So that’s where my focus is."

Irving simply answered "ask me July 1," when asked if still intended to re-sign with the Celtics, but then further explained what he meant by the quick response.


"Nah, I’m just going to do what’s best for me. That’s what it really comes down to. Obviously this has become an entertainment thing for everybody. So somebody else is asking for a trade and I’m thrown into that, and uncertainty comes back on me.

"So obviously things this season haven’t gone as I planned, and that’s part of being on a team where you’re still trying to figure things out. So I’m always going to be mature about that, professional, come to do my job every single day and really just see what happens. And that’s what it really comes down to."

When asked about why he decided to announce his intention to remain in Boston prior to the start of the regular season, Irving looked annoyed and spoke about living in the moment of a promising year and not having to talk about his future on a nightly basis.


"I think it was just the excitement, feeling emotionally invested coming off an injury last season trying to prove something, trying to be very much of a team-oriented player, which I am naturally.

"But at the end of the day, I spent the last eight years trying to do what everybody else wanted me to do in terms of making my decisions and trying to validate through the media, through other personnel, managers, anybody in this business. And I don’t owe anybody shit.

"So for me, I think the confidence I have in myself and my abilities, I want to be able to control what I want to control. I still have confidence in Boston and what they can promise for the future and what we have in terms of our pieces.

"That’s what excited me a lot about the beginning of the season, was the opportunity to come into this season really just doing what we planned on doing, set a goal and go after it and then see what happens at the end of the season. That was the plan before and that’s still the plan now. Obviously Boston is still at the head of that race. That’s just where it stands."

Irving was asked if there was any pressure from Danny Ainge and the Celtics about his initial long-term commitment.


"I mean, this is like college recruitment all over again. So, I don’t know, like, I don’t know. This is just weird. This is a new position for me to be in, answering all these questions, seeing all this stuff that I’m trying to avoid, and it’s just a distraction.

"It’s crazy how stories and things and story lines can seep into a locker room. You guys are part of the destruction of locker rooms. That’s just what it is.

Despite the rumors and distractions, it hasn't effected the Celtics as of late, who have won seven of their last eight games -- losing to the Warriors last week and are now only a game and half behind the Sixers at 32-19 for third place in the East.

ESPN's senior writer and long-time Celtics reporter Jackie MacMullan voiced her opinion this week about rumors surrounding Irving's future in Boston during her appearance on ESPN's "Around the Horn:"


"I will say this: There is some frustration from Kyrie Irving. Of course there is. Because this team is not performing the way he had hoped and he is carrying a huge load, and he doesn't want to be the James Harden of New England, OK. But, it's January. He hasn't made any kind of seismic decision like that. And let's say even if he is a little unhappy and a little unsure. Don't you think bringing Anthony Davis aboard may quell all of those fears or concerns for Kyrie Irving? So, I don't put any stock in it. Sorry."

If you believe what MacMullan says, then Irving's comments about his future make sense because of the type of season the Celtics have had up to this point. With 31 games left before the playoffs and the NBA trade deadline less than a week away, the wait and see plan is the only thing anyone involved can do.

Then again, winning does make any decision that much more easier, if Irving hasn't already decided on his future yet.