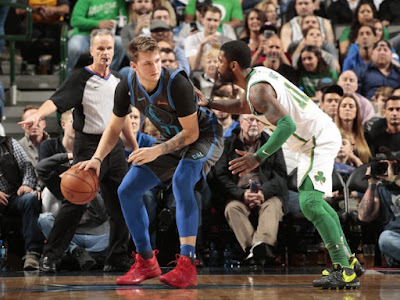 Jayson Tatum led Boston with 21 points on 9-of-14 shooting, while Kyrie Irving (6 assists, 5 rebounds) and Marcus Smart each finished with 19 points a piece. Jaylen Brown added 16 points and 5 rebounds before leaving the game late in the fourth quarter, after falling awkwardly on his back when he was trying to block a running layup by Lucka Doncic (15 points, 8 assists).


The Celtics trailed the Mavericks 106-90 midway through the final frame following back-to-back 3-pointers from J.J. Barea (20 points, 8 assists) and Wesley Matthews (15 points). Harrison Barnes also hit five from beyond the arc to add to his 20 points on the night to give the Mavs (9-9) their sixth straight win at home.


"We don't impose our fear and will on teams," said Marcus Smart, who had to be held back from fans by Irving in the final seconds at the American Airlines Center. "Last year, teams when they came in and played the Celtics, they knew they were in for a fight. This year, teams can't wait to play us and that's a problem."

It's the third time over the last month the Celtics have lost on a second night of a back-to-back following a win. Boston, who played without Gordon Hayward in the lineup (left ankle soreness) are now 5-7 on the road.

Brad Stevens will head back to the drawing board before the Celtics face the Pelicans in New Orleans, who are also 10-10 on the season, come Monday night.

Al Horford returned to the Celtics lineup after being out on Friday night with a sore left knee. The All-Star big man finished with 8 points and 8 rebounds.