Celtics 118, Timberwolves 109: Get used to seeing Gordon Hayward come off the bench 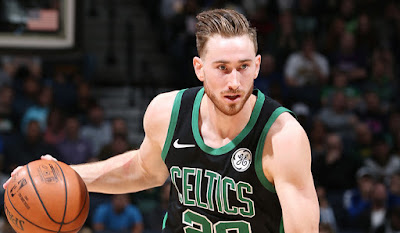 Would it be the worst thing in the world if Gordon Hayward became the Celtics' new sixth man of the year?

Forget about how much money he makes, the sole All-Star selection and the fact that he dropped 30 points Saturday night against the Timberwolves, because aside from Hayward's season-best performance, underneath the game's headline read the following; the revamped lineup delivered once again. And that lineup isn't showing any signs of slowing down.

Marcus Smart and Marcus Morris continue to thrive alongside the starters. They combined for 26 points on 7-of-14 attempts, including 6-of-11 from deep to go with their 6 steals. Meanwhile, Hayward not only went off for a season-high 30 points but he also flirted with a triple-double (9 rebounds, 8 assists).

However, the majority of his production came when he was facing Minnesota's reserves. The Timberwolves couldn't contain Hayward and he took advantage by making plays for his teammates, driving to the hoop and earning trips to the free-throw line.

Hayward became the first Celtics player to attempt 10 free-throws in a single game and he drained each and every one of them while the starting five set the tone early and never gave up a lead after the first quarter. The closest the Timberwolves came to grabbing a lead came in the second half after a 10-0 run before the Celtics directly responded with a 9-0 run and never looked back.

Derrick Rose came off the bench and led the Timberwolves with a game-high 26 points. Karl Anthony-Towns added 20 points, 9 rebounds and and Robert Covington finished with a double-double (17 points, 10 rebounds).

Hayward's 16 fourth-quarter points helped seal the Celtics' third consecutive win. Brad Stevens has always been a 'it's not about who starts, it's about who finishes' kind of guy, therefore, it didn't surprise anyone to see Hayward on the floor to end the game.

And for that same reason, it shouldn't matter if Hayward ultimately becomes an NBA Sixth Man of the Year candidate. This is a move that is best for the team right now and if that case rings true after the All-Star break in the second half of the season, there shouldn't be a level of disappointment in Hayward.

No one could have foreseen Hayward's gruesome injury last year. The past 14 months have been quite a setback. Still, the level of talent throughout the Celtics roster has forced Stevens to make decisions that have led to positive results and if it leads to seeing the fourth highest-paid player in the NBA come off the bench of a championship contending team then so be it.

If the wins continue to stack up, get used to it. The Marcus tandem lineup is 3-0 so far and averaged 83 points throughout that span while Hayward is steadily picking up momentum in his quest of returning to form.

Hayward coming off the bench is a good thing and should be embraced if it ultimately becomes part of the Celtics' newfound identity.

Celtics: For the second straight night, Boston finished with 30 assists and 17 3-pointers