Marcus Smart focused on playoffs, while his mom begins chemo this week 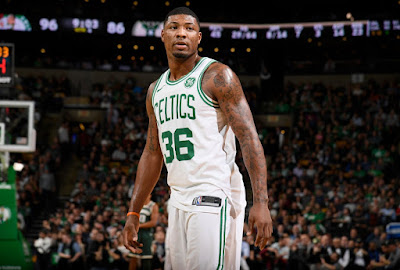 Marcus Smart's mother, Camellia, has began chemotherapy treatments on Monday as part of the battle of her recent diagnosis of bone-marrow cancer, according to the Celtics guard.

Despite the fight against her illness, Smart's mother has asked her son to remain focused on Boston's current playoff run.

Since Smart's return from thumb surgery in Game 5 against the Bucks, the Celtics are 7-2. Smart's mother got to enjoy Boston's Eastern Conferance Finals Game 1 win over the Cleveland Cavaliers on Mother's Day, while surrounded by plenty of family.


"It's tough. I'm not going to lie, it is tough," Smart said Tuesday. "I'm professional; we have a job to do. And that's something about my mom, she's real big on, 'I'm going to be OK, go handle what you gotta do. And I'm going to be all right.' That gives me a little comfort to go out there and not really feel guilty of being here instead of there with her.

"But it is tough. It's tough, but I have a great support [system] around me."

When Smart returned to his locker, he had already had one missed call from his dear mother after Sunday's blowout win.


"My whole family was actually watching. They all went over the house," Smart said. "It was good to hear everybody. When she called me, the smile and joy that she had in her voice lit up my day."

Though Smart has struggled with his shot, he's currently averaging 10.4 points per game on 34.1 percent shooting, to go along with 4.6 assists, 4 rebounds, and 1.7 steals over 30.4 minutes in nine games this postseason.

Smart's mother still offered up some advice to her son on not to hesitate to take a shot when he had an open look.


"My biggest critic and my biggest fan, and I love her," Smart said.

Smart said his mother will undergo chemo treatments three times a week and that "she's doing well," and "she's responding."

While Smart's thumb injury has been well documented, he's also dealing with lingering soreness in his right hand, which he previously injured in late January, when he swiped at a picture frame. Smart recently injured his hand when he dove for a loose ball (the same way he tore ligaments in his thumb to begin with prior to the playoffs) against Milwaukee in the previous round.


"This hand of mine," Smart said looking down at his injured right hand. "Especially this right one's been through tremendous ups and downs, man. Still fighting. I'm just trying to hang in there. I can rest after the season."

Smart and the Celtics will look to go up 2-0 when they host the Cavaliers at the TD Garden tonight.