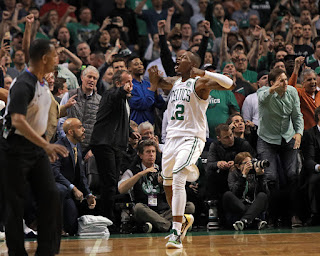 The process wasn't simple for the Celtics Wednesday night -- when they closed out their best-of-7 series against the Sixers -- however, the lasting impact wasn't fleeting, either.

Boston captured its second-round victory, 114-112 over Philly at TD Garden, punching its ticket to the Eastern Conference Finals -- where they'll take on the Cavaliers in a rematch of last year's showdown between the Celtics and LeBron James. The C's have stunned many skeptics throughout their postseason run.

While few predicted the Celtics would ultimately top the Sixers and advance to being four wins away from the NBA Finals, fewer anticipated it would happen in five games. However, it's tough to set a bar for this young Celtics team because whenever you do they'll, seemingly, exceed it.

Still, Game 5 was no cakewalk. It was a knock-down, drag out fight from start to finish as Joel Embiid's inside presence reeked havoc while Dario Saric put together his best game of the series.

In the front court, the duo took advantages of mismatches in the post against opposing guards. Saric also got hot from the perimeter and Embiid got to the free-throw line early and often.

Jayson Tatum's 14 first-half points on 6-of-7 shots got him going early. The Celtics rallied behind him and Rozier, who scored 11, including three from behind that arc, in the first half.

Boston picked up the tempo after the break. They momentarily kept the Sixers at bay in the third quarter.

While the Celtics held onto a double-digit cushion, the Sixers turned to their best player -- Embiid -- for relief. Through three quarters, he netted 20 points and pulled down seven rebounds. They continued to turn to him in the post -- where he converted contested field goals via post ups against Al Horford and Aron Baynes or got to the free-throw line.

Embiid's production triggered Philly's momentum as guys like Saric and J.J. Redick picked up their offensive rhythm -- which pulled the Sixers to within four (78-74). Then the lead was trimmed down to one thanks to a 3-pointer from Redick towards the end of the frame (83-82).

It topped a 16-4 quarter-ending run for the Sixers. And with under seven minutes left to play, the game was knotted up at 94.

During a timeout, former Patriots quarterback Drew Bledsoe appeared on the jumbo-tron. He unzipped his jacket to expose his Terry Rozier jersey and the crowd at TD Garden erupted. And so did the Celtics' offense -- it triggered a quick 6-0 run.

Back-to-back buckets from Horford that was capped off by a steal and finish from Rozier. However, back came Philadelphia in the form of a 9-0 run. Embiid rattled off four straight points, Saric drained a 3-pointer and Ben Simmons converted an easy-2 -- which gave Philly its first lead since the second quarter.

It was another double-double night for Embiid (27 points, 12 rebounds) -- his fifth straight -- Saric added another (27 points, 10 rebounds) for Philly and Ben Simmons finished with 18 points, eight rebounds and six assists.

That's when the Celtics' defense stepped in and strung together a handful of stops while Tatum attacked the rim, Al Horford finished strong and Marcus Smart made a heads up play on a tip in. When Saric attempted to back down Smart in the paint, he loss control of the ball before Horford swiped the ball away and it ultimately found Tatum for the transition layup.

With 18.8 seconds left, the Sixers turned to Embiid in the post but Aron Baynes came up with the huge defensive stop. Embiid then grabbed the offensive rebound but the post defense collapsed on the young All-Star as he was unable to convert the tip in shot and ultimately lost the ball before it fell out of bounce.

After Rozier split a pair of free-throws, JJ Redick converted one from deep to pull the Sixers to within one point but with no timeouts left and only 2.4 left on the clock after Smart converted 1-of-2 from the charity stripe, Simmons' desperation lob pass fell into Smart's hands as time expired.

It was another gritty performance from the Celtics -- one that personified the resilience and fight we've seen from this team all year long.


"It showed itself over and over tonight," Stevens replied when asked about the team's relentless approach. "I thought they were great all night. I thought we ended that first half on a really flurry but anytime we got any semblance of a lead or cushion they crushed it right away. I mean, to go from down six to up four the way they did in the last four minutes -- it's hard to do when this place is rocking like that. They have a heck of a team and really poised and hard to beat."

Sixers put up a tremendous fight as they were just minutes away from extending the series and sending things back to Philly. In the end, the Celtics prevailed and will now prepare for LeBron James and the Cavaliers -- an Eastern Conference Finals series set to kick off Sunday at TD Garden.

After committing 15 turnovers in Game 4, the Celtics limited themselves to only 10 -- an impressive feat for what was a very chippy and physical game. Boston forced 16 Sixers turnovers, including 12 steals.

Photos used is courtesy of Getty Images
Posted by Josue Pavon at 11:59 PM