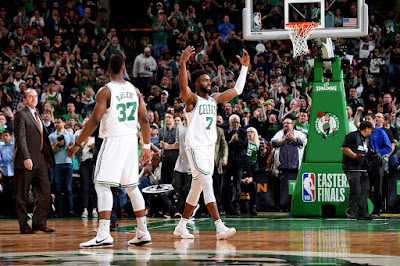 It was an old fashion blowout by the hands of the Celtics.

Boston grabbed a 1-0 lead in the Eastern Conference Finals against the Cavs at TD Garden, dominating Cleveland from start to finish in a Sunday matinee.

Some could have predicted the Celtics to leap out to a first-quarter lead in front of their home crowd, however, few expected a 21-point lead. The Celtics used a 24-4 run to grab a big lead in the opening frame -- which set the pace for Boston.

Behind 24 combined first-quarter points from Jaylen Brown and Al Horford, the Celtics established the low post early by producing the majority of their offense from in and around the paint. From there, it opened up looks from outside -- where Boston connected on a pair from deep before tacking on 36 points.

The Cavs tried to work their way out of a 21-point hole before the end of the first quarter, carving it down to 18 and then down to 15 minutes into the second. But it didn't last much longer than that.

Boston continued to ride its offensive momentum from the beginning and coupled it with defensive stops that led to easy buckets in transition. The end result? A 26-point Celtics lead at the break, 61-35 in what was their best first half of the year.

Brown scored 18 of his 23 points before halftime, Horford had 14.

Cleveland turned to its sharp shooter in Kyle Korver, who misfired on three attempts from deep in the first half, and he finally got one to go in the third quarter. It was the first made 3-pointer on 15 attempts by the Cavs.

The Celtics' lead teetered between 25 points and mercy-rule territory before settling on 14 (78-64) before the final frame. Cleveland closed out the third on a 12-3 run that was capped off by a buzzer-beating mid-range jump shot from Jeff Green that swished through the bottom of the net.

Boston's response? A 7-0 run to pull its lead back up to 21. The Celtics converted two field goals off back-to-back turnovers from the Cavs and a Marcus Morris' 3-pointer from the corner forced Cavs head coach Tyronn Lue to call a timeout 1:09 into the fourth quarter.

The Cavs never recovered from the run at the start of the final frame and five minutes later all starters were subbed out.


"We didn't play well," Lue told reporters after the game. "We understand that. We know we have to be better. I thought early on they really attacked us in the paint. Having 60 paint points is way too many but they played a good game."


"We had our moments here we really played with poise," Stevens said after the game. "We were down 16 in the game we won at Cleveland. But the couple of games here didn't go our way, and I thought we just weren't able to make it more interesting.

"I think that being able to respond to the next run is really important. You know, the guys that are back, I think, echo in that all the way through. Now the challenge is even greater Tuesday night."

The Celtics will look to grab a 2-0 lead Tuesday night at TD Garden.

The Celtics challenged the Cavs to beat them from the perimeter and it paid off. Cleveland shot 4-of-26 from deep and finished with a 36 percent clip from the floor.