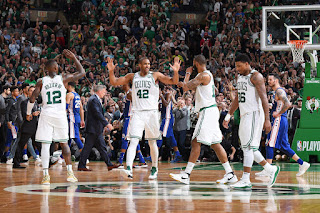 In another improbable win, the Celtics erased a 22-point deficit on their way to a 108-103 win over the Sixers and grabbed a 2-0 lead in their best-of-7 series.

Behind an epic 20-5 run, the Celtics turned Philly's 22-point lead into five. Jaylen Brown, who made his series debut after nursing a sore right hamstring, got it going throughout the frame alongside Terry Rozier, connected on a pair of of 3's.

And the run didn't stop there. Boston grabbed the lead after kicking off the second half with a 25-12 run, deflating the Sixers' hopes of regaining the momentum of the opening frame.

Boston pulled ahead by eight (76-68) with 2:25 left in the third, which was plenty of time for Philly make a run and prevent the C's from grabbing their first double-digit lead of the night. Robert Covington, who finished with 22 points on the night, got it going from deep, and so did J.J. Redick, who was a constant thorn throughout the night.

He also showed off his range throughout the night and drained a pair from deep that gave Philly a two-point lead with under eight minutes left to play. The Celtics and the Sixers went back and forth before Boston started to pull away.

His one point on 0-of-4 attempts left a gaping hole in the box score. He did manage to dish out 7 assists but also committed five turnovers and with a minus-23 game rating.


"I think the way Boston is guarding us in general is something that I respect," said Sixers coach Brett Brown after the game. "I have said every time either pre or post game and when I see you in practice, I have said this before [Celtics] are elite guarding their own men. I think there's a physicality and switch-ability that they got apples for apples on many, many different matchups. With Ben [Simmons], I give him credit.

"They do a good job defending him. There's an element of physicality that I feel they have applied to all of us and tonight Ben struggled as we see. I do give Boston's defense a lot of credit and respect."

When the topic of Boston's physicality was brought up to Simmons at the podium, he downplayed the impact of the Celtics' defense as the leading cause for his poor performance.


"I think the first series, the way the Heat played, is nothing compared to the Celtics," Simmons admitted. "Physically, the Heat were on another level. But yeah, I think it was self-inflicted from myself, personally from my own game. Team-wise, I think mentally we made too many errors when we had that lead and we need to stay on it."

The Celtics took care of home court advantage and will head to Philly for Game 3 on Saturday with hopes of grabbing a commanding 3-0 lead.

The Celtics used their outside touch to propel their comeback, and it ultimately sealed their Game 2 in the second half. Boston knocked in 15 from deep, nearly tying their 17 3-pointer made in the Game 1 on Monday. The Celtics already converted 32 3-pointers in the first two games (96 points).