Keys to a Celtics Game 4 win against the Cavaliers 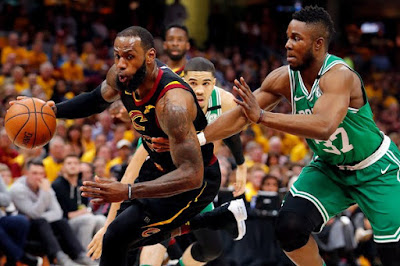 The Celtics, who lead the Eastern Conference Finals 2-1, got blown out of Quicken Loans Arena by the Cleveland Cavaliers in a 116-86 Game 3 loss on Saturday night.

While Brad Stevens chucked it up to the Cavs simply  "took it to us, point blank: They just outplayed us." Game 4 suddenly becomes a pivotal one for the Celtics if they want to crush any hope for LeBron James and the Cavaliers that they can still win this series.

Here are four keys to a Celtics win on the road and take a 3-1 commanding lead:

Boston can't afford to get in another 17-point hole in the first quarter, while James feeds his supporting cast on open looks, especially from behind the arc. The Celtics have to strike first and early, similar to their start in Game 1.

Scary Terry has to show up on the road -

Though not a horrible performance in Game 3 on Saturday, Terry Rozier has to take it to the cup and pick his spots from the 3-point line, while finding his teammates. There is no better time for "Scary Terry" to make his debut on the road than tonight, something that was seen in the first two rounds away from TD Garden.

The seasoned veteran, Al Horford put up field-goals in Game 3 and the ghost of the Q's past might have spoked the All-Star. If you haven't noticed already this postseason, the Celtics go as 'Playoff Al' goes. Stevens and Horford's teammates have to find him, along with Al staying active on the boards and attempting at least 10-12 shots.

Get back to playing that Boston defense -

The Celtics defended the LeBron and the Cavaliers physically and aggressively, but also stayed in control in Game 1 and 2. They can't let their emotions or referee Scott Foster get the best of them in Game 4.

Help defense on drives and taking care of the ball on offense to prevent points in transition is what made the difference at home versus their play on Saturday.

Boston also can't let the Cavaliers hit 17 3-pointers, they have to limit Cleveland's second and third opportunities on the glass.

After what Jaylen Brown said on Sunday during Celtics shootaround and being in early foul trouble, there should not be much of a concern about the second year wing having a bounce back game on Monday night and hitting the 20-point mark like he did in each of his performances at the Garden.