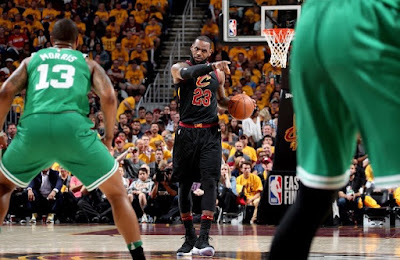 The Celtics had three days to prepare for LeBron James and the Cavaliers to extend their 2-0 series lead, but what they didn't expect was to be served a slice of some humble pie.

It was a poor showing for Boston, at the Quicken Loans arena, as the Cavs showed signs of life in a 116-86 blowout Game 3 win, to now be down 2-1 in the Eastern Conference Finals.

James led all scorers with 27 points to go along with 12 assists, while the rest of his supporting cast looked like a completely different Cavaliers team at home, compared to the first two games at TD Garden.

Kyle Korver finished with 14 points off the bench, on just five shot attempts and went a perfect 4-of-4 from behind the arc. Kevin Love added 13 points and grabbed a game-high 14 rebounds to record his second straight double-double of the series, as six Cavaliers ended up scoring in double figures.

Boston fell into an early 19-point hole in the first quarter and never recovered, while the Cavs pushed their lead to 30 in the second half and finished with 17 made 3-pointers on the night.

Jayson Tatum scored a team-high 18 points and Terry Rozier added 13 points for the Celtics, who never had any kind of offensive rhythm from the opening tip.

Jaylen Brown, who led the Celtics in scoring with 23 points in each of the last two outings at home,  struggled to get his shots up early, while also getting into foul trouble, chipped in only 10 points.


"They took it to us," Celtics coach Brad Stevens said. "Point blank: They just outplayed us."

Boston, who clearly were more physical and aggressive on both ends of the floor in Game 1 and 2, only shot 29-of-74 (39 percent) from the floor and were out-rebounded by the Cavaliers 53-42 on Saturday night.


"The toughest team sets the rules," Rozier said. "They came out aggressive from the jump and never looked back. We've got to play aggressive from the rip. Tonight, we were all over the place, playing too fast and doing things we didn't want to do."

The Celtics are now 1-5 on the road in the postseason and will look to bounce back in Game 4 at the Q on Monday night. Boston overall has a record of 37-0 when they win the first two games in a playoff series.

The Cavaliers have improved to 14-6 at home when they face the Celtics in the playoffs, while Brad Stevens is 3-9 against Cleveland in the postseason.