Celtics will be physical with LeBron James and the Cavaliers 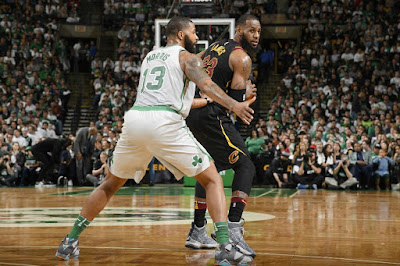 On the eve of the Eastern Conferance Finals, the Celtics, who have been the underdogs in each of the last two series, will look to stop the Cleveland Cavaliers from reaching their fourth straight NBA Finals.

Boston, who clearly have not lacked any confidence throughout their postseason run, will have the ultimate challenge ahead of them, as they embrace the chance to slow down superstar LeBron James, who's looking to make his eighth consecutive trip to the championship round

Celtics forward Marcus Morris is just one example of someone that's excited to make life difficult for James as the series goes on.


"Personally, I think I'm probably the best guy defending him in the league, outside of Kawhi [Leonard]," said Morris.

Morris guarded James during their only other playoff meeting back in the 2015-16 campaign with the Detroit Pistons.


"That series, it was fun. It was my first time being in the playoffs, being able to go against one of the best players in the league, if not the best. It was definitely a good time," said Morris. "Circumstances are a little different now. I'm a little older, a little more experienced."

The Celtics have kept no secrets about how many bodies they plan to throw on LeBron James, but it looks like Jaylen Brown and Marcus Morris will have the most minutes against arguably the league's best player.

Despite Morris only playing in two out of the three games against the Cavaliers in the regular season, the Celtics forward did limit James to 13 points (4-of-11 shooting) in Boston's only win over the Cavs back in January.

Morris did note that it's going to take a team effort to guard James and limit him going off like he has against the Pacers and Raptors.

When the Celtics acquired Morris for defensive juggernaut Avery Bradley last summer, it was viewed as just a cap-saving move to sign Gordon Hayward, but it also gave Boston some added toughness for another playoff run.


"That's one of the things [Celtics president of basketball operations Danny Ainge] said when I first got here, that I was one of the guys they felt as though could guard LeBron," said Morris. "So they really wanted me here, and not only because of that, just the toughness and things like that. But that was definitely one of the major points that he brought up when getting me here."

The Celtics will have their first crack at LeBron James and the Cavaliers beginning on Sunday afternoon from the TD Garden, as Game 1 tips-off at 3:30 pm EST.