Pressure is on Sixers coach Brett Brown heading into Game 3 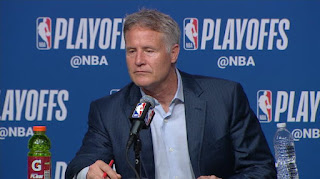 Facing a 2-0 lead in their best-of-7 series against the Celtics, the pressure is mounting on Sixers head coach Brett Brown to find a way to slow down Boston's blistering offense before Game 3 in Philadelphia.

After allowing 17 3-pointers in Game 1's 117-101 loss, Boston came two treys shy of duplicating their outside touch Thursday night -- when they completed a 22-point comeback win against the Sixers. Philly made an effort in the first quarter to close out on their opponents but as the game progressed the Celtics slowly created space with ease and were able to free up easy looks.

The Celtics averaged 112.5 points in their pair of wins at TD Garden -- an impressive feat against a top defensive team such as the Sixers and Boston's outside shooting had a lot to do with that. The C's combined for 32 treys while limiting Philly to 102 points -- eight points shy of their season average.


"I think their speed at times does bother us," Brown admitted after Game 2. "Obviously, the matchup with Al is a tough one for us and for most of the league. In general,  you go and have a strong look at the free-throw line/3-point percentage. But still I think this scoring came with them attack off the dribble and collapsing on defense and we give them credit for when they found open 3-point shooters."

After ending the regular season as a top-10 scoring team, Philly is not only being out-scored by a team that finished in the bottom-10 in points per game but also, by n injury-depleted squad that's finding ways to produce without its best scorer. Without Kyrie Irving, guys like Al Horford, Terry Rozier and Jayson Tatum have picked up the slack and are hitting the Sixers with staggering numbers.

However, being able to deliver another top-notch performance will be a daunting task for the Celtics. Boston went 0-3 on the road against the Bucks, and with the Sixers thirsty to capture their first win in three tries, Brown has has to make the proper adjustments to give his team a fighting chance to turn the series around.