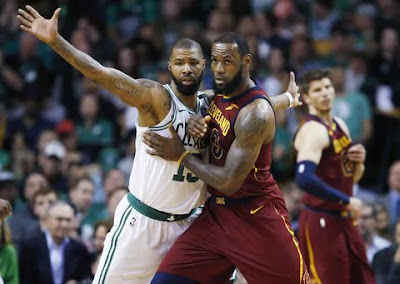 Marcus Morris had been waiting for his opportunity to face LeBron James in the postseason all season long.

It was one of the strongest talking points heading into the regular season. Morris, who was traded from the Pistons in exchange for Avery Bradley last summer, joined a Celtics team that was looking for him to fill a defensive void.

He entered the season with high defensive numbers against James throughout the 2015-16 campaign  -- higher than any other player in the league that season by one statistical metric. In a season where LeBron averaged 36.5 points per 100 possessions, Morris held him to just 20.5 points, according to Nik DeCosta-Klipa of Boston.com.

So when Brad Stevens decided to insert Morris into the starting lineup ahead of Game 1 of the Eastern Conference Finals, it didn't come as a surprise. And neither did Morris' confidence.

Morris told reporters Saturday after team practice that he considers himself the league's second-best LeBron defender, and backed it up in the series opener.

Morris handled the majority of James' possessions in a game where LeBron finished with 15 points on 5-of-16 from the field. It's safe to say plugging Morris into the starting unit was a success.

However, Morris was humble enough to not take all of the credit when he spoke to reporters from the podium.


"It's a team effort, man. It's not just me," Morris explained. "Everybody played their part in guarding him. He's obviously the best player in the game and you need multiple guys and learn to guard him an entire game. I just think we did a great job of that."

With the thought of what Morris said prior to Sunday's matchup, one reporter asked why was he looking forward to guarding LeBron?


"Because I'm a competitor," Morris responded. "He's the best player, you know? I'm going to be able to tell my kids this one day. It's exciting. I love the challenge but like I said, man, it's a team effort."

Morris' presence was felt on the opposite end as well -- where he netted 21 points on 7-of-12 attempts to go with his 10 rebounds. The Cavs will look to adjust in Game 2 -- where they hope to avoid heading back to Cleveland down, 2-0.