4 Keys to a Celtics Game 6 win over the Cavaliers 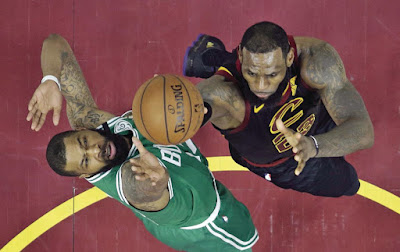 The Celtics are one win away from reaching the NBA Finals for the first time in eight years, the last team other than a LeBron James led squad to make it out of the Eastern Conference.

Boston has a chance to end James' reign at the top of the East and possibly leave the city of Cleveland for the second time tonight, in what could be his last game in a Cavs uniform.


Here are four keys to a Celtics victory at the Quicken Loans Arena:

Though the Celtics are 10-0 at the TD Garden this postseason after a much needed Game 5 win at home over the Cavaliers and only 1-6 on the road, Boston has to mentally prepare themselves for a hostile crowd at the Q. Just like in Game 3 (their lone win away from the Garden) against the Sixers, they can't be scared of the moment.

Tonight would be perfect to pick up their first win in Cleveland on the season and end LeBron James' 2017-18 campaign against the same team he opened up with this year. Not to mention, the Celtics should do it for Gordon Hayward (in the same place he sustained his injury), Kyrie Irving (former Cav) and advance to the Finals, while 'shocking' the world.

Brad Stevens has to stick with the same starting lineup, meaning having Aron Baynes start for Marcus Morris, while shortening his rotation and making the bench stronger. Morris and Smart each finished with 13 points a piece as a great one-two punch of a second unit.

The Cavaliers had no answer for Baynes' solid contributions on both ends of the floor (scoring and rebounding) in Game 5. Baynes had a solid performance on Monday in Cleveland, while only playing 16 minutes. Look for Smart to bounce back from his horrible shooting woes of Games 3 and 4.

Where is 'Scary Terry?'

Terry Rozier finished with 8 points on 3-of-15 field-goal attempts and 1-of-7 from behind the arc, his worst shooting outing of the postseason at home. Though he grabbed 6 rebounds and dished out 6 assists with only one turnover, 'Scary Terry' is due to make an appearance on the road.

Rozier notched a double-double of 16 points and 11 rebounds in Game 4, while his mother was in attendance. Tonight is time to put the mask back on and go to work at the Q and take it home for mama.

In 2012, when LeBron and the Heat were on the ropes and down 3-2 to the Celtics in the Eastern Conference Finals, Bron-Bron put on his hard hat and went to work at the TD Garden. In arguably his best game of his career, he forced a Game 7 and the rest was history. This time around both rosters and jerseys are completely different and LeBron might be also slowing down, if you witnessed certain moments from Wednesday night.

Don't get me wrong, he his still capable of putting this Cavs team on his back both tonight and Sunday if need be, but all things must go his way. This means he has to be almost perfect from the field, while his teammates have to knock down shots, which hasn't always been the case.

It's up to the Celtics to not let James get a second wind and play the type of defense they played in the three wins at home and deny his teammates touches or force tough shots, if they want to dethrone 'King James.'

During the Celtics 2008 playoff run through the East, they only won two games on the road (both against the Pistons in the ECF) before reaching the NBA Finals. Their second win came in Game 6, when they eliminated the Pistons, thus ending their five-year run as contenders.

If we've learned anything from this current Celtics roster, is that when you least expect them to come through they have always found a way to pull it off.

Can these Celtics make it happen again tonight?