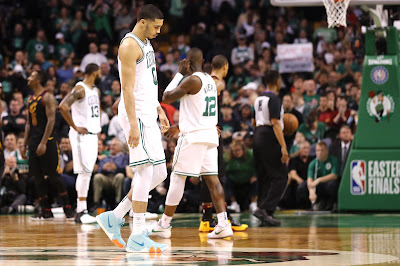 Call me an old fashioned Boston sports fan if you will, but the 2017-18 Celtics missed a golden opportunity to not only make it to the NBA Finals for the first time in eight years, but also finally hand LeBron James his first loss in an Eastern Conference playoffs series since 2010.

Sure, Boston was without arguably its two best players in Kyrie Irving and Gordon Hayward throughout a great playoff run, but as much I hate the cliche "we felt like we were the better team," when the more talented roster loses, that quote applies to this Celtics team more than ever against the LeBron-led Cavaliers.

It's easy to point to LeBron James, who averaged 33.6 points per-game during the Eastern Conference Finals, as the sole reason for the Celtics losing. He did notch a triple-double of 42 points, 12 assists and 10 rebounds in Game 2 (a loss), plus, 35 points, 11 rebounds and 9 assists in a Game 7 clincher to snap the Celtics' 10-game home win streak in the postseason.

At age 33, James is not slowing down and if I had a vote for MVP of the league in the regular season, it would go to him, not James Harden. But, with all that said, this type of performance in the playoffs was expected of James. Despite his greatness, it took seven games for the Cavs to advance past the Celtics, in an eight-point win on Sunday night.

These young Celtics let Game 7 slip from their fingers after having a double-digit lead early in the second quarter, while the national media was banking on the fact that no one had beaten them at home in 10 tries, only to turn LeBron into the 'underdog' that was counted out during his run to the Finals.

The Celtics' worst outing of the postseason, where they put up 86 points in a blowout loss to the Cavs on the road, was Game 3. Boston not only lost by 30 points, but shot 39.2 percent from the floor, including going 6-of-22 from behind the arc and never had a chance to gain a lead, never-mind win the game.

Believe it or not, the Celtics, who shot 34 percent from the field in Game 7 against the Cavaliers, still had a chance to re-gain a lead and win, despite poor shooting (7-of-39 from 3-point land) and only managing to put up 79 points on the board in a close-out game at home.

Both teams each held the other to under 100 points in four games (Cleveland, three times was held to under 87 points or less) during the Eastern Conference Finals, while Boston (96.7) and the Cavaliers (97.5) each averaged about 97 points per-contest through seven games.

Outside of James' 30-plus points a game, the next best Cavalier coming into Game 7 was clearly Kevin Love, who averaged 12.5 points and 9.8 rebounds in six games, but was unable to play due to a concussion. So a combination of Kyle Korver (9.5 points, 1.6 rebounds), George Hill (9.3 points, 1.8 assists), Tristian Thompson (7 points, 7.8 rebounds), Jeff Green (7 points, 2.6 rebounds) and JR Smith (5.1 points, 2.5 rebounds) would be the Cavs second and third options coming into the TD Garden.

You would have thought after a 10-point loss in Game 6 on the road, where the Celtics had a chance to close-out and advance to the Finals even after shooting over 50 percent from the field, the No. 1 defense in the league would make sure not to let George Hill, who finished with 20 points and Jeff Green, who added 14 points, go off again in Game 7.

Nope, that was not the case.

These same young, unbeaten at home, not afraid of the moment Celtics wet the bed and let Green, who started in place of Love, score 19 points this time and grab 8 rebounds, while JR Smith hit three 3-pointers on his way to 12 points and 4 rebounds. They allowed the Cavaliers to beat them by scoring a mere 87 points on the same parquet they had protected so well throughout the postseason.

The Celtics froze when the lights were at their brightest and everyone was watching.

Literally, everyone was watching Game 7.

It was reported that an estimated 13.3 million viewers tuned in on Sunday, the second most watched NBA game in ESPN's history. Between 10:30-11 PM ET, ratings peaked to 17.4 million, according to Nielsen, so a lot of eyes witnessed the collapse of the Celtics to say the least.

Boston's leading scorer for the series Jaylen Brown finished with 5-of-18 shooting from the field, including going 3-of-12 from behind the arc for 13 points and 6 rebounds in Game 7, while Terry Rozier chipped in a whopping 4 points on 2-of-14 shooting, 0-of-10 from 3 to go along with 4 rebounds and 4 assists (zero turnovers).

Rozier (28) and Brown (27) combined for 57 points in a Game 6 loss on the road and not to mention Marcus Smart added 10 points off the bench on 4-of-7 shooting for a combined total of 67 points from the Celtics backcourt just 48 hours prior to Game 7.

If Rozier and Brown just hit their series average, we'd be talking about a different outcome, instead, Celtics fans are left wondering why Tatum (24 points, 7 rebounds) and Horford (17 points), who were the only two that had their offense going for Boston, stop getting their touches, especially after the Celtics rookie's emphatic dunk over LeBron James with a little over six minutes to go and the C's down 71-69.

A better question to ask, why did the Celtics guards elect to keep popping 3's instead of taking it to the hoop when the Cavs were in the penalty with over eight minutes to play in the final frame and James had committed his fourth foul?

Did these Celtics belong to be here?

They sure earned it and deserved to push this thing until the wheels fell off, that was at least my expectation when most didn't believe they could make it past the first-round.

At the end of the day or this postseason run, the Celtics showed their age, inexperience and gave away Game 7, rather than the latter of LeBron being LeBron and taking it to the C's in front of the Garden faithful.

Boston going 7-of-39 from beyond the arc was similar to the Houston Rockets (7-of-44) missing 27 straight 3-pointers in their Game 7 loss to the Golden State Warriors on Monday night, just 24 hours after the Celtics blew their chance to beat LeBron James.

I guess Charles Barkley is right, when it comes to those teams that 'live and die by the 3.'

Only I don't think the Celtics had to go out the way they did, especially since they should have learned that hitting a single in certain situations is better than trying to hit a homerun. A lesson I thought they learned against the Bucks, Sixers and Cavs (on the road) over the last month in a half.

These Celtics were smarter than that and now we'll never know how this gritty, hard nosed version of this team could have faired against the likes of a vulnerable Warriors team, that was finally tested for the first time since the 2016 Western Conference finals against Oklahoma City.

I'm not saying the Celtics would have definitely beaten the Warriors, but it would have been a far more intriguing series to watch.

Now we'll have to listen to ESPN repeat how 'amazing' LeBron James is for taking the worse team he's ever had to the Finals, even when he'll ultimately lose.

I have to agree with Stephen A. Smith for calling James 'lucky' to make it out of the East, because of his unorganized roster of misfits, who you'll never know is going to show up. The Cavs barely got by the Celtics, who's average age is 24 years-old and had never been one win away from the NBA Finals.

It's simple really, when it comes to how I feel about the way the Celtics season ended; the better, deeper team didn't win this time, while 'King James' gets all the credit.

But yet, weren't the Cavaliers the favorites to win all along?

I wonder if James had lost, would he be called the 'greatest of all-time' that had no help again like in each season from 2007-10?

I'm over it already, Golden State in four!

*All stats used from BasketballReference.com