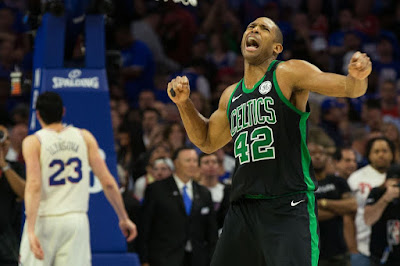 PHILADELPHIA -- It was an instant classic -- a defining moment for the young Celtics in their fourth consecutive win of the postseason -- which pushes them to one win away from the Eastern Conference Finals.

Boston topped the Sixers 101-98 in Game 3 on Saturday, Philadelphia is now on the brink of elimination.

After what a dramatic turnover by J.J. Redick -- a mistake that ended with a Jaylen Brown layup -- the Sixers had a final attempt with 1.7 seconds left to play. Marco Belinelli then drained a long two as time expired.

But that didn't stop the Wells Fargo Center from dropping confetti. Belinelli's foot was on the 3-point arc's deep in the corner -- which forced overtime.

Philly rallied off five quick points before the Celtics hung around but trailed by four before the final minute. Jayson Tatum drove to the rim to pull to within two before Joel Embiid's pass ended up in the hands of Terry Rozier.

Al Horford drew a foul and split the pair of free-throws and Embiid missed an 11-foot jumper that landed in Ben Simmons' hands but he came up short on the put-back. With 8.4 ticks left, Brad Stevens set up a play that started with an inbound pass from Marcus Morris into Al Horford for a game-winning layup in the paint.

Sixers coach Brett Brown said before Game 3 that he would look to his 3-point shooters for help when in need of it and that was exactly what his players did from start to finish. After J.J. Redick (2) and Robert Covington (4) missed Philly's first six attempts, the Celtics capitalized -- they opened up a 10-point first-half lead.

The second quarter was a shootout. Both teams let it fly, after Redick and Belinelli connected on back-to-back threes at the end of the opening frame, it pulled the Sixers to within one (20-19) and led to four more from the two before halftime.

The Celtics also got it going from deep and through the first three quarters 3-point shooting was responsible for 30 of Boston's 69 points while the Sixers drained 8-of-25. Still, Philly only trailed by one.

Embiid turned in his third straight double-double (22 points, 19 rebounds) and Saturday's was easily his most impressive. Redick added 18 points, Ben Simmons bounced back from his 1-point performance with a 16 points, 8 assists and 8 rebounds and Ersan Ilyasova led the bench with 14 points and 7 rebounds.

Celtics will look to wrap up the series Sunday night in Philadelphia.

Boston held the Sixers to a 39-percent shooting percentage. The Celtics buckled down defensively, especially late in the fourth quarter and in the overtime period.