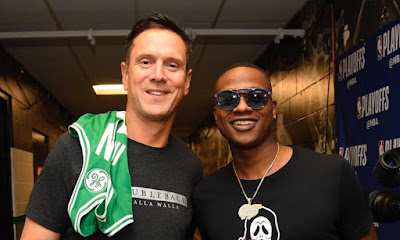 Ever since Terry Rozier made the mistake of referring to Bucks guard Eric Bledsoe as Drew Bledsoe, the former Patriots quarterback, Rozier and Drew have shown a mutual respect for one another.

Bledsoe co-signed Rozier by saying how much he enjoyed watching him play throughout the first round of the playoffs, and Rozier honored the former Patriots quarterback by rocking his throwback No. 11 jersey to Game 1 against the Sixers. When he was asked about it, Rozier said the retired quarterback was "his guy" before jokingly admitting he had never even met him, but that changed Wednesday night at TD Garden.

The two were spotted in the hallway by the Celtics locker room hours before tip-off where they chatted for a while before posing for a picture.


"That was amazing, man. I met him for the first time before the game and we talked and it's just fun how it all came together full-circle," Rozier said to reporters after Game 5.

Bledsoe, who made multiple appearances on the jumbo-tron rocking Rozier's No. 12 uniform throughout the night, also spoke to reporters after Game 5. He made an unexpected visit to the podium.


"This whole thing with Terry has been super fun," Bledsoe said. "So proud of the Celtics and this whole thing that's been going on. It's been fun going back and forth with Terry but it's mostly fun because the Celtics have been playing great basketball and I've been a big fan for a long time."

He then went on to say that they've been in contact since the Bucks series via social media but Wednesday night was the first time they met face-to-face.


"I met Terry for the first time about three and a half hours ago," Bledsoe said. "We been in contact [through] social media -- this whole thing has been a lot of fun."


"Tonight kind of got the blood flowing again, kind of got me fired up. I wanna go," Bledsoe said. "Give me a football, put me in for a quarter. I may not be able to give you a whole game but I can give you a quarter."

Before donning Rozier's jersey, Bledsoe showed up to the arena wearing a Doubleback Winery t-shirt -- his wine company that he says is in the beginning stages of creating a Rozier-inspired wine named the "Terry Rozay."


"Terry Rozay may be the thing," Bledsoe said. "Watch out. I'll have to talk to him, bring him out to Washington and develop a profile. We'll come up with the Terry Rozay. It's going to have a great finish."