Jaylen Brown on his performance in Celtics Game 3 loss: 'It was embarrassing' 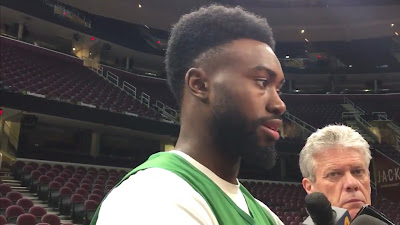 The Celtics find themselves still up 2-1 in the Eastern Conference Finals, despite the Cavaliers' overpowering 116-86 Game 3 win on Saturday night. Jaylen Brown is just one of many that spoke out on the loss that clearly didn't sit well with him.


Jaylen Brown said he was embarrassed by his performance in Game 3. He’s eager to atone. pic.twitter.com/WfnVXkJI2R
— Chris Forsberg (@ESPNForsberg) May 20, 2018


"I thought it was embarrassing," Brown said at Celtics shootaround today. "The way I played, the way I performed, how not aggressive I was in the first half. I look at that as fuel."

Brown struggled to find any rhythm early, as the Cavaliers made it clear that their game-plan was to disrupt the Celtics swingman's offense by defending him aggressively.

It didn't help that Brown also got into foul trouble in the first quarter, while playing limited minutes for the rest of the first half and the Cavs taking advantage of Brown being on the bench.


"The game is ninety percent mental," he said. "So everything that we do affects or mindset, so we can’t look at the last game and get down on ourselves or think we’re out of the series because we lost one game.

The Celtics will look to bounce back in Game 4 on Monday night and possibly pick up only their second win in seven games on the road during the postseason.