Joel Embiid was not impressed with crowd at TD Garden, says Philly fans are louder 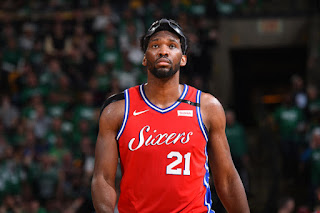 Celtics fans may have a new target on their radar Thursday night at TD Garden.

After attacking Ben Simmons with chants of "Not-a-rookie" in Game 1, look for C's fans to zero in on big man Joel Embiid in Game 2 following his thoughts on what it was like playing in his first playoff game in Boston.

Embiid, who got a firsthand look at what playoff basketball at TD Garden is like, wasn't impressed with Monday's raucous environment.

Are your fans louder?


"Yeah. I was fine," Embiid followed up. "It didn't bother me, you know. But they were great, they supported their team tonight. It was good. I love that type of atmosphere because it kind of elevates my game knowing that there's a lot of fans out there that are talking trash, saying some crazy stuff."

The crowd certainly didn't have an effect on Embiid's monster double-double. He finished with a game-high 31 points and pulled down 13 rebounds.

His play kept the game relatively close throughout the second half until the Celtics eventually pulled away in the fourth quarter.

Before walking off the podium after a 117-101 loss, Embiid told fans to keep it coming -- a remark that will stick with C's fans from now until Thursday.


"I love when people talk trash, keep bringing it on and we're gonna see how it goes."