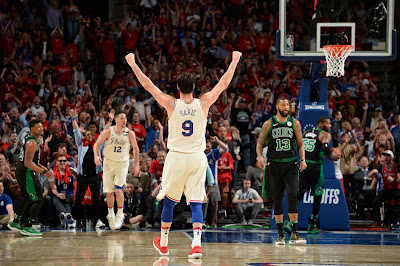 PHLADELPHIA -- The Sixers live to see another day, as they left it all on the line Monday night at the Wells Fargo Center, they survived a sweep in a 103-92 Game 4 win over the Celtics.

Dario Saric led the way with a game and playoff career-high 25 points, Ben Simmons turned in a double-double (19 points, 13 rebounds) but it was T.J. McConnell who gave Philly the push they needed to capture its first win of the series. The backup point guard learned Monday afternoon he was going to be starting and didn't disappoint coach Brett Brown.

McConnell finished with 19 points (career-high), seven rebounds, five rebounds and second to Joel Embiid (plus-22) for a game-high plus-18 player rating.


"We were going into walk through at the arena, it was around two o'clock, and walked out onto the floor and our assistant coach Lloyd Pierce actually notified me first," McConnell explained. "I just switched my mindset around to knowing I'll probably be playing a little bit more minutes and just have to be ready."

The decision was a no-brainer for coach Brown.


"The obvious is the obvious," Brown said. "It's the way he plays, it's an injection of energy that you immediately know you're going to get with him."

Celtics coach Brad Stevens pointed to his team's turnovers and lack of cleaning the glass as key factors to Game 4's loss. He also credited Brown and the Sixers for the win despite the fact that neither team put together a strong offensive performance.


"We ended up with 15 turnovers, the offensive rebounds were enormous for them," Stevens explained. "The extra possessions. Neither team shot great but they were really good tonight and hats off to their team, hats off to Brett (Brown) and his staff, they were terrific."

When the topic of the game's physicality was brought up, Stevens believes it's natural at this stage of the series for both teams to put forth this level of aggression. It happens in almost every playoff series.

However, Celtics forward Marcus Morris, who finished with 17 points and 5 rebounds, didn't take kindly to Sixers players' trash talking in Game 4. It isn't how he would approach the game, Morris explained while adding that he's looking forward to potentially getting the last laugh in Boston on Wednesday.

Al Horford, who reminded reporters how important it is for the Celtics to protect home court, wasn't surprised by the attitude from the Sixers players.


"They are obviously going to come out aggressive and we have to come out the same way," said Horford, who ended up with 10 points and 10 rebounds on the night. "They did what they were supposed to do here. We were able to steal one on Saturday, they protected their home court tonight. We have to go home and protect ours."

The Celtics will have another crack at clinching the series Wednesday at TD Garden, as no team in NBA history has ever come back from a 0-3 series deficit.

Jayson Tatum led Boston with 20 points to go along with 4 rebounds, 4 assists, while Marcus Smart added 14 points and 5 rebounds.

The Sixers won the battle off the glass 60-53 and Joel Embiid was a huge reason why, as he grabbed 13 rebounds and chipped in 15 points on 6-of-15 shooting from the field.

The Celtics shot 41.3-percent from the floor, while the Sixers, who finished with 20 more attempts, hit 40.4 percent of their shots. Despite Boston losing in Game 4, Jayson Tatum became the first Celtic to score 20 or more points in six straight playoff outings since Paul Pierce in 2009.