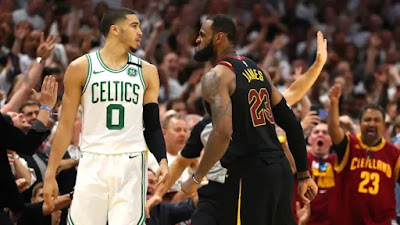 LeBron James and the Cleveland Cavaliers live to see another day, as they remain unbeaten at Quicken Loans Arena against the Celtics this season, after a 109-99 Game 6 win on Friday night.

James put on another classic performance of 46 points on 17-of-33 shooting against Boston, to fend off elimination and force a Game 7 back at TD Garden.

James, who possibly might have played his last game as a Cav in Cleveland, also finished with 11 rebounds and 9 assists, nearly notching a triple-double.


"It's a Game 7," James said. "It's something that you wish you had when you're done playing, but more than that, it's just basketball for me. I know what I'm capable of doing, and I'm going to trust everything I put into it."

The Cavaliers bounced back in the second quarter after losing Kevin Love to a head injury, when the All-Star forward collided with Celtics rookie Jayson Tatum on a screen. Love, who was clearly shaken up and did not get back on his feet for several minutes, immediately returned to the locker room on his own.

George Hill played his best game of the series, as he added 20 points, while Jeff Green turned back the clock to lead the bench with 14 points. Larry Nance Jr. picked up the slack for Love and chipped in 10 points and 7 rebounds for Cleveland in 22 minutes.

Terry Rozier led the Celtics with 28 points (6-of-10 from behind the arc), 7 assists and Jaylen Brown, who's been leading the team in scoring throughout the Eastern Conference Finals, finished with 27 points on 11-of-18 shooting from the field.

Marcus Smart (8 assists) and Marcus Morris each scored 10 points a piece off the bench for the Celtics, who will be playing in their second Game 7 at home this postseason.

Boston got out to their first good start in Cleveland this series, leading by as many as 17-points, before the Cavs made their run to regain their lead --32-31--in the second quarter and never looked back.

By halftime the Cavaliers only led Boston 54-43, despite 25 points from James at intermission. The Celtics cut the deficit to single-digits on Rozier's hot shooting from the behind the arc midway through the third.

The Celtics were down seven with three minutes to play in the final frame before James hit back-to-back 3-pointers that saw the Cavs' home crowd get it at it's loudest of the night.

Though the game was still seemed in reach, James would hit another 3-ball, his fifth on just seven attempts and he followed that up with a three-point play to ice the game for the Cavs.

Boston will now have to rely on the fortress that is the Garden, where they are 10-0 in the playoffs, to knock LeBron James off the East throne, where he has reigned supreme since 2011.

The Celtics have been the underdogs in nearly every game this postseason, especially on the road, where they are now 1-7.

As for Game 7 in Boston, the Celtics are two point favorites over the Cavs and according to TicketIQ, Sunday's game is the fourth most expensive Game 7 in all of sports in the last seven years, averaging a price of $916 per ticket.

Jayson Tatum stayed in the game following his collision with Kevin Love early in the first quarter. While on the bench, the rookie passed all concussion testing given to him.


"I didn't see him coming, it was bad," Tatum said. "I have a knot on the back of my head and he didn't return. I wish the best for Kevin Love because he's a great player and it's been a long season."

Tatum finished with 15 points on 7-of-13 shooting from the field, to along with 3 rebounds and 2 assists.