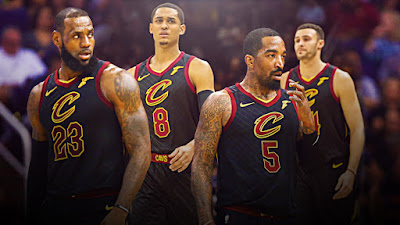 An awful lot of proud Celtics fans are hounding on-air personalities like LeBron James apologist Nick Wright for doubting Boston's ability to even steal one game from the Cavaliers. Well, we should understand that it's crazy to bet against James, given his track record against east teams since 2011.

Even if this is possibly the worst LeBron-led team since 2007, you'd be hard pressed to predict a Celtics victory after his demolishing of Toronto and its franchise's proverbial manhood. I made the mistake of betting against LeBron in 2015 selecting the Bulls to shock the Cavaliers in the postseason.

Then I tapped Atlanta's 60-win Hawks squad to do what the Bulls ultimately failed to do. That Cavs team was without Kevin Love and had only one playmaker besides James at their disposal. At the time, I doubted Kyrie Irving's ability to make something happen when simple isolation action wouldn't provide sufficient results. Boy, was I wrong.

Can the other Cavaliers benefit from LeBron or are they too inept? I'm leaning towards the latter.

Last year's Cavs roster sported five Hall-of-Famers, five All-Stars, depth at almost every position and a big in Thompson that could still crash the glass and exhibit peak athleticism. It's only because they ran into the Golden State Warriors they did not win an NBA title. Fast forward one year later; Irving is gone and he sorely missed.

Cleveland is also missing the veteran leadership from Jefferson, who was traded during the regular season. Hood and Clarkson aren't as good as they looked when they joined the Cavs and helped stomp all over the Celtics in a blowout.

Tyronn Lue has struggled throughout the first two games to find the best rotation to counter the Celtics. In Game 2, Lue squandered a possible offensive explosion from Korver after he took only eight shots in little over 21 minutes of play. In the second quarter, Krover torched Marcus Smart for 11 points on 4-of-5 shooting. It's worth noting that Lue started the erratic Smith over Korver and had J.R. on a considerably longer leash as he blundered his way to a 0-of-7 performance and finished the night with zero points.

In Game 3, Lue needs to re-institute Korver into the starting lineup and banish Smith into oblivion. Korver is shooting at a 44 percent clip from deep and is Cleveland's only reliable offensive option outside of James and Love.

Smith needs a seat on the bench. Not only has he not shown up on offense, Brown's lit him up like a Christmas tree in the first two games -- where he went 7-of-9 for 19 points in the 24 possessions he spent guarding Brown.

At this point, the Cavaliers should look into punishing Smith for his flagrant foul on Al Horford in Game 2 with a benching in Game 3. Lue could've benefited from not having Smith as an option as he seems past his expiration date as a productive player and looks to be trying to stop the Celtics' momentum by the means of dirty, underhanded tactics.

Another adjustment Lue should make is staggering LeBron and Love so that one of them is on the floor at all times. Surprisingly, Lue's never done this in the series and given the fact Love rallied up 22 points in Game 2, it seems the veteran forward has rediscovered his groove after a sluggish performance in Game 1 and can still cause problems for the Celtics.

If Lue is not going to make an effort to get Korver more than eight shots a game, then he might as well give a longer leash on Love. He's also going to need to find a way for LeBron to conserve his energy on the defensive end.

Cleveland cannot outscore Boston unless Smith is having an outer body experience. The Celtics defense is too good to let the older, decrepit Cavaliers' supporting cast do anything. However, Lue would be wise to play a style of basketball known as "Caveman-ball" -- something David Blatt/LeBron made famous in the 2015 Finals. Slowing the game down to a snail's pace, try and get Korver and Hill open spot-up jumpers and leave the paint untouched until the final two minutes of every quarter.

LeBron can still get to his favorite spots around the basket, it's just taxing on his 33-year-old body. Regardless, James needs to give better effort of defense, even if it means scoring just 25 points per game, opposed to having the aw-inspiring 42.

The Cavaliers and James need to stop going under screens set for Brown. He's a proven shooter by now who's hitting 40.1 percent of his shots from the floor this season. For all the knee-jerk adjustments Lue made for Game 2, he seems to be stuck in thinking this is 2017 but without Irving, James' supporting cast is just super-flawed.