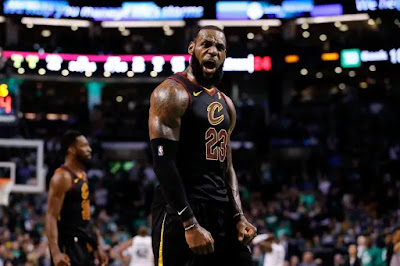 LeBron James and the Cavaliers topped the Celtics in a Game 7 clincher at TD Garden and have earned a trip to the NBA Finals.

Cleveland outscored Boston, 48-36 in the second half. The Celtics had a handful of opportunities to put together an offensive run but came up empty in the final minutes.

Trailing by four points, Marcus Morris missed a 3-pointer and Terry Rozier failed to capitalize on a second-chance opportunity from behind the arc. James cashed in on those shortcomings, starting with a trip to the free-throw line, followed by an assist to George Hill for two and ended with an open jumper that was a dagger.

The Cavaliers extended their lead to nine points with 1:04 left on the clock. James scored a game-high 35 points, 15 rebounds and played all 48 minutes.

The Celtics got off to a much-needed quick start Sunday -- an 11-4 run. With great spacing and ball movement, Boston managed to get open jump shots and high-percentage shots in the paint for Al Horford.

Horford poured in 10 before the Celtics held the Cavaliers to 18 first-quarter points while leading by eight. Boston kept the Cavs at bay throughout the first half but Cleveland was never too far behind. The Celtics took a 43-39 lead into the break before the Cavs were threatening to grab the lead midway through the third quarter when James drained a 3-pointer.

Cleveland trailed by one point, then led by two when James found Green in the corner for an open trey. It was the Cavaliers' first lead of the second half and they barely gave it up from that point moving forward.

The Cavaliers will find out which team they'll be facing in the NBA Finals tomorrow night when the Warriors and Rockets face off in Game 7.

Celtics shot 34 percent from the floor, including 7-of-39 from deep. The Cavs finished shooting 45.5 percent.