Brad Stevens on receiving praise for Celtics success: 'It's silly' 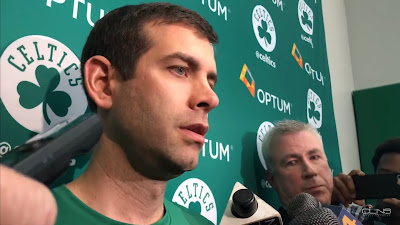 The Celtics are three wins away from their first trip to the NBA Finals in eight years, but if you're Brad Stevens, Sunday's blowout win and a 1-0, series lead over the Cleveland Cavaliers means nothing more than just one game.

Boston is back in the Eastern Conferance Finals for the second straight season, where Stevens had to come up with a plan B and C after Gordon Hayward went down in the first five minutes of the 2017-18 campaign, then Kyrie Irving before the start of the playoffs.

Still, Stevens won 55 games, clinched the No. 2 seed and now has only his second win over LeBron James and the Cavs over the last four postseason runs.

If you ask Stevens about receiving praise for the Celtics success so far this season, he'd tell you that his players deserve the credit more than he does.


"It's silly," said Stevens during Monday's shootaround. "The praise is uncomfortable, and it's just something that these guys should be getting it all. We all have a role to play, and we all need to play that role as well as we can."

The Celtics have improved their win total every year since Stevens’ arrival at the start of the 2013-14 season. Stevens will set a new career-high in the postseason with one more victory, beating out last year's win total after leading Boston to the Conferance Finals.

Despite roster turnover, especially over the past year, Stevens has maximized his talent pool and credits the Celtics president of basketball operations Danny Ainge for putting together a deep team that has been able to defy the odds with all the injuries, while gaining much needed experience, especially during the playoffs.


"It's a collaboration amongst everybody, but Danny is the one that chooses the players and he's hit absolute home runs," said Stevens.

One of those 'home runs' this season was the signing of free agent Aron Baynes, who has been a key contributor on defense as well as having his moments of high scoring when it was least expected. The Celtics big man, is one of two champions (the other being Irving) on the roster that can attest to Stevens' coaching ability, especially since Baynes won a title under Gregg Popovich in San Antonio.


"They're both great coaches. There's definitely a similarity between them," said Baynes. "They definitely have their own methods as well. There are some comparisons but in a lot of ways they are their own coach, and I'm just lucky to be able to learn from both of them and still learning from Brad a lot."

Of course, not everyone is on the Brad Stevens bandwagon, since arguably the best coach in the NBA, still has not won a championship yet.

Celtics legend; Robert Parish made an appearance on Sirius XM NBA Radio Monday afternoon, suggesting that Stevens shouldn't get any kudos just yet until he at least raises another banner in Boston.


"I think he gets a little too much praise, but I like what he's doing," Parish said. "They're giving him all the love like he won three or four championships. Come on now. Win something first, with all the love he's getting. Now granted, don't get me wrong, he's a solid coach, I'll give him that. The love he's getting from the media, you'd think the Celtics won two or three championships."

Parish added: "That don't mean that you're not great or good just because you never won a championship. That's not what I'm saying. I'm not saying Brad Stevens should not be getting praise for the job that he's done because I feel like he's done an outstanding job. I'm just saying, the amount of praise he's getting, you'd think he won a championship or two. They don't give Steve Kerr that much love. Come on."

Though a harsh reminder from a Hall-of-Famer, Stevens is well aware of the end goal. For those who agree or disagree with 'The Chief' and his opinion, ultimately Stevens doesn't care when it comes to media reports.

Whether it's not gaining a single vote for Coach of the Year or beating LeBron by 25 points, Stevens knows an NBA title is the only thing that matters.

Until then, like Stevens said on Sunday, it's just one game.