Five Keys to a Game 5 Victory Against the Sixers 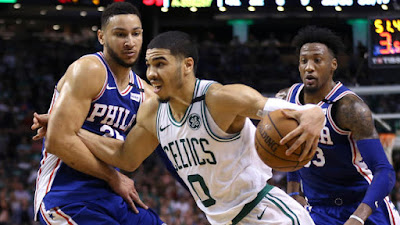 The Celtics will have another shot at closing out the Philadelphia 76ers tonight in Game 5 at the TD Garden. Boston leads their best-of-7 series 3-1, while LeBron James and the Cleveland Cavaliers await them in the Eastern Conferance Finals for a second consecutive season.

It is not going to be easy to fend off a hungry and prideful Sixers team at home, but here are five keys to secure a Game 5 win to advance to the third round.

The Celtics were out-rebounded by the Sixers in Game 4 on the road 53-42, though not a huge discrepancy overall, but the 76ers did grab 16 offensive boards, while taking advantage of second and third chance opportunities.

Boston needs to crash the glass on both ends and limit Philly's transition offense, while setting the tone at home early and often.

Look for Al Horford, the team's leading rebounder, to gobble up double-digit boards and limit Joel Embiid from recording another double-double.

Good things happen when Al Horford has the ball in his hands, his teammates need to set him up so he gets his touches. Horford has proven thus far in the playoffs that he has been the Celtics' most important asset, especially at home.

Horford is a savvy veteran, who anchors the defense, rebounds and has hit big shots at key moments throughout this series. Brad Stevens needs to make sure Big Al is involved in all aspects of Game 5 on both ends.

Shane Larkin (shoulder) will not play tonight or anytime soon for that matter, meaning Stevens is down another guard (a defensive one at that) going forward. Whether Jaylen Brown or Marcus Smart start alongside Terry Rozier, the Celtics can not afford to have their offense interrupted due silly foul calls.

The Celtics found themselves in early foul trouble in Game 4, limiting Jaylen Brown to get going offensively. Marcus Smart fouled out late in Game 3, at a key moment where the Sixers had all the momentum prior to overtime.

Boston has to stay aggressive, while staying in control, despite playing at home in a closeout Game 5, they can't rely on officials or argue with them either.

This key goes without saying, the Celtics have one of the best home crowds in the NBA that they have to take advantage of. The C's are 6-0 at the TD Garden during their postseason run and while the Bucks know how loud it can get (see Game 7), the Sixers still have not experienced the environment of a closeout in Boston, like Milwaukee did.

The Garden will be loud and have a creative chant or two for Ben Simmons and Joel Embiid throughout the night.

The Celtics have to take care of the rock, especially after turning the ball over 15 times in Game 4. Though Boston scored more off of turnovers (16-3) on Monday than the Sixers, the C's have to control loose balls and stop making lazy passes.

Boston needs to swing the ball, find the cutters and hit the open man. If the Celtics can channel their Game 1 ball movement (27 team assists) versus Game 4 (16 team assists), the Sixers will head home back to Philly for the Summer.